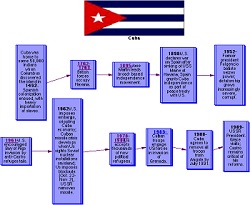 Christopher Columbus discovers Cuba and claims it as Spanish territory.

Beginning of the slave trade from Africa.

The Treaty of Paris returns Cuba to Spain.

War of independence lasts for ten years between Cuban colonials wanting independence from what they see as unjust rule from Spain. The War ends in a treaty and promise of greater autonomy for Cuba.

Spain relinquishes all claims to Cuba after military defeat by the United States.

Gerado Machado becomes dictator of Cuba. Cuba develops in agriculture and mining under his rule.

Machado overthrown in a coup led by Sergeant Fulgencio Batista.

General Batista seizes power of Cuba and oversees a corrupt government in which dissent is brutally suppressed.

Fidel Castro begins a guerrilla war from his base in the Sierra Maestra in Eastern Cuba.

The US stops military aid to General Batista.

All US owned businesses in Cuba are nationalised.

US plan an unsuccessful invasion by Cuban exiles at the Bay of Pigs.

Cuban missile crisis occurs when Castro allows the USSR to deploy nuclear missiles in Cuba. The crisis was solved when the USSR agreed to take back the missiles in exchange for the US withdrawing their missiles from Turkey.

A new socialist constitution is approved by the communist party and Fidel Castro is elected president.

Cuba sends troops to help Angola’s left-wing MPLA withstand attacks by South Africa, FNLA and Unita. Assistance is also given to Ethiopia against attacks from Somalia and Eritrea.

Cuba withdraws its troops from Angola following an agreement with South Africa.

The US continues its embargo on Cuba. The US dollar is legalised in Cuba, several state farms are changed into semi-autonomous cooperatives. Cubans are also allowed to own and run very limited small scale businesses for the first time since the revolution.

An international incident is sparked when Cuban child Elian Gonzalez is picked up off the Florida coast after the boat in which his mother had tried to escape to the US capsized. Cuban exiles in Miami begin a campaign to prevent Elian from returning to his father in Cuba. Huge protests occur in Havana calling for the return of Elian.

US Under Secretary of State John Bolton accuses Cuba of trying to develop biological weapons.