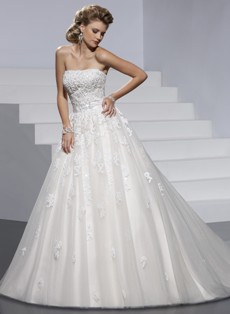 For the large majority of Turkish women the wedding dress would be their first ornamented attire that they would wear in their lives. This was because according to tradition women would not wear fancy clothes before they got married. Hence the wedding dress was very important for the Turkish bride, as for the first time she would be allowed to wear a dress made out of rich fabrics in bright colors with embroidery and sequins patterns.

Traditional Turkish wedding dresses would be made in bright colors so as to reflect the joyous moment. Red was by far the most popular color used for the bride’s wedding dress. Other common colors often used in combination with red were blue, purple and pink. The women from the royal family would almost always be made to wear red wedding dresses tailored according to the fashion of the time.

The Turkish woman was not allowed to display her beauty publicly. This is why she was made to wear a complimentary bridal veil that would cover her face during the wedding ceremony. Up until the 1870s the use of pastel colors was almost nonexistent in traditional Turkish wedding dresses. However, as western influence continued to grow upon the Turkish public, you could now see brides wearing white wedding dresses. The trend started out with the royal family and soon made its way into the general public.

The design sense employed in creating Turkish wedding dresses varies according to the region. Every region has its own color palette, embroidery style and construction of the dress that is in line with their own customs. Turkish weddings could last for over a month and in the wedding ceremonies or seasons, . the bride of the upper class would wear a different dress at every stage of the wedding celebration. Amongst the important events that were almost always part of the traditional wedding celebration was the henna night followed by the nuptial day and then the actual wedding ceremony. The dress worn on the actual wedding day was known as the Pacalik.

The typical Turkish wedding dress would consist of a pair of baggy trousers known as the salvar in Turkey. This would be topped up by a jacket, a robe or a blouse that was known as the kaftan or entari. The combination of the entari with the salvar is considered to be the oldest traditional wedding dress for Turkish women. The trend of wearing entaris continued after the mid-19th century and there were many different styles in which the  garment could be made. It could be worn along with skirts of different lengths as well, and had varying necklines.

A new style of wedding dresses developed in the early 19th century, which was known as the dort etek and the uc etek. This was a unique dress in which the skirt was actually divided into different sections. They would have slits at the side that would be used to form panels that would extend all the way to the ground. They were open from the front and would-be fastened at the waist with several buttons. This style went out of fashion amongst the Turkish women from the urban city centers but continued to flourish amongst the rural areas.

Turkey 0 14
Need some Wild Turkey facts? Read on to find out the facts on how

Turkey 0 16
Are you visiting Turkey ? Want to know about shopping and things to buy?

Turkey 0 6
Going on holiday to Turkey? Your trip may coincide with one of Turkey’s religious

USA 0 3
A Palm Desert location makes an excellent wedding venue. If you want to plan

Animals And Plants Of Argentina
Argentina
Want to buy Traditional Turkish wedding dresses? Read on to discover the variety of
0 2773