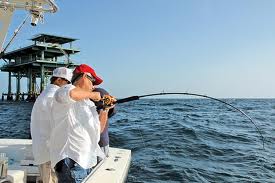 Red Grouper Cuban Longline fishing has allowed large fisheries to get hold of a big population of fish by using huge boats as well as longline to fish in the Caribbean. Excessive regulations have resulted in fisheries getting a great catch each time whilst sports fishermen and amateur anglers have been regulated drastically with the federal plan to protect red grouper populations in the Gulf of Mexico. This regulation restricts sports men from indulging in fishing activities so that the impact of over fishing can be reversed over 10 years.

This certainly denotes that feeding on the fish has been restricted simply to allow fisheries to benefit in the next decade with a replenishment of the depleting population of the red grouper through Cuban longline fishing.

This plan has been sponsored by the federal body called the NMFS which is the National Fisheries Management Service authority. This organization has the funding of 700 million dollars to support its activities. Records dating as far back as the 1950s revealed that fishermen were hunting approximately 18,000,000 pounds worth of Cuban red grouper every year which is twice the amount of the fish that is caught currently from these waters. So it is no wonder that the red grouper Cuban population has depleted drastically and needs to be controlled and managed by regulating saltwater fisheries that operate in these areas.

However, there are many assumptions aimed to classify what a healthy amount of red grouper Cuban fish quantity should be but none of the organizers have been able to mark out what the average fish size and the numbers should be. It was noticed by fishermen in the late 1970s that the quantity of the catch was reducing drastically along with the average size of the Cuban red grouper.

Division of the Red Grouper for Fishers

Approximately 81% of the red grouper population caught in the Gulf of Mexico is fished by the commercial fishery outfits which own huge boats and indulge in catching the red grouper Cuban through longline fishing.

The remainder 19% of the catch is attributed to sports fishermen and recreational fishermen who indulge in this sport. Although the Magnuson Act denotes equality to all fishermen and denies favoritism towards corporations, group or individuals in the distribution of this natural resource – the red grouper Cuban, the truth is far from this desire for equitable distribution.

By 2000 the data for fishing shifted to reflect 75% of the fishing being conducted by the large main fisheries while 25% of the catch was allocated to recreational fishermen.

The longline fishing technique is considered devastating to the population of red groupers. A few states had banned the use of longlines by restricting them from distances of 20 fathoms to 50 fathoms however by 1999 when the fish stock was assessed and shown to be depleting rapidly some changes were enforced.

Due to red tape, bureaucratic delays and contradictory data there is a lot of ambiguity in this area. Fishermen have been quoted as saying that they use longlines which run up to 40 miles in length and may have anywhere between 500 to 1000 hooks in each of the 3 mile steel cable.

This is basically dragged at the bottom of the ocean with bait on the hooks which catch fish for around five hours in each set. The red grouper Cuban is like a sitting duck along with other fish that actually get caught on the hooks but unfortunately many of them are simply injured and approximately 1/3 of the catch is dead by the time it is dredged up. The problem with using longline to fish the red grouper in Cuban waters is that a lot of unwanted fish and marine life gets stuck on the bottom longline which leads to wastage and a very high mortality rate of unwanted species.