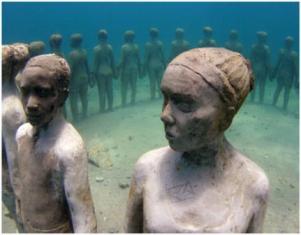 Interested in information on the Sunken City in Cuba? Read on to find more about the magnificent structures in the sunken city off the coast of Cuba…

The discovery of one of the most exciting structures in old world history has been credited to ocean engineer Paulina Zelitsky and her husband and son who together discovered the underwater city off the coast of the Caribbean. This family of three used side scan sonar and videotaped a structure which was sitting approximately 2200 feet below sea level.

This huge city had stones which were laid out in a geometric design to create a city that resembled the Aztec temples and Mayan temples from the country of Mexico. National Geographic has shown increased interest in the site and sent down a minibus to explore the architectural structure which resembles an urban city with well-planned pyramid style architecture and hieroglyphic inscriptions on the buildings.

In the search to locate the lost city of Atlantis which was propagated by the ancient philosopher Plato during his time in 370 B.C. many an excavation and archaeological expedition has been taken on to allow the search for the lost city. Atlantis is considered to be an island city which has extremely advanced technology and was constructed in a beautiful manner. However, the description of any lost city is vague and unclear causing massive discrepancies in identifying and classifying the ancient archaeological sites found underwater. From the Bermuda Triangle and the areas near the famous Bimini Road all the way to Mexico and the British coastline, as well as the Cuban coastline and even Antarctica; the search for Atlantis has taken researchers, scientists and geologists all over the world.

Clues to the Identity of the Underwater City in Cuba

The sunken city in Cuba will be analyzed for insight into the architectural structures which have been created by unique rock formations and lie on a mud volcano which is extremely fertile land and can be used for cultivation. In fact some theories even suggest that there is a land mass that has sunk at different intervals off the coast of Cuba and initially was actually connected to one of the provinces in Mexico.

When looking for unknown ancient civilizations the interesting structures found in the sunken city of Cuba have enthralled many researchers and civilians. The sunken city of Cuba is located on the western edge of the Cuban Peninsula called the Guanahacabibes Peninsula. Researchers have joined hands to delve further into the mystery of the geometrically designed rocks which look like granite and are extremely smooth to the touch.

The sunken city of Cuba lies at a depth of 2000 feet and covers a 20 km² radius. It seems that the sunken city has reached where it’s present sub-aqua location due to seismic movements like earthquakes and was perhaps an ancient civilized nation which sprawled the continent of America millennia ago.

There are various theories purported by geologists and scientists who feel that the age that the structures have been dated at which is 6000 years old cannot be credible because this would mean that it was built before the wheel was invented. Apart from this it is possible that the structures were formed by the constant erosion of limestone found naturally in this area. However, since the theory of natural formation has not been established there seems to be more leaning towards this being a man-made structure because there is a clear indication of the use of intelligence in designing the plan of the city. It is difficult to assume that these symmetrical and well configured structures have been created in a natural manner without the involvement of human intelligence.