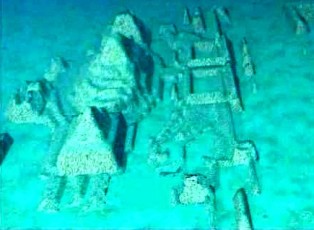 With the July 2000 discovery of a megalithic site off the coast of Cuba a possible link between the New World and the old may be established very soon. This site was discovered off the western shores of the country of Cuba at a depth of approximately 2310 feet below sea level.

It was a chance discovery by oceanic engineer Paulina Zelitzky and possibly one of the most exciting discoveries of the 21st century. This underwater city covers an area of about 7.7 square miles and is located in close proximity to the Guanahabibes Peninsula.

Paulina Zelitzky an oceanic engineer by profession is the owner of a company called Advanced Digital Communications and used the side scan sonar to identify huge architectural structures right in the middle of the sparking white Caribbean sand.

Majesty of the Underwater City in Cuba

In co-operation with a team of Canadian and Cuban researchers this city which was discovered submerged deep in the Caribbean waters is dated to be approximately 6000 years old. It was a heartening discovery for the family consisting of the engineer Paulina Zelitsky, along with her spouse, Paul Weinzweig, and son, Ernesto Tapanes.

This underwater city has architectural structures which are approximately 400 m wide and 40 m high with some of them placed one on top of the other. The unnatural symmetry of the structures gives them a very unique shape and design. Any scientist who has assessed them in the United States, the Cuban region and other countries of the world has not been able to suggest that they are naturally formed but suggest man-made structures following a natural building code.

With the side scan sonar and videotaping you can clearly see an unknown language which is used to create symbols and scriptures on the architectural structures. The images on the sonar radar however reveal that there is a high degree of similarity between the underwater city in Cuba and the Aztec temples and Mayan temples which were discovered in the city of Mexico.

Teams have often returned to the site with robotic excavators and these allow an evaluation on the site by blowing sand away from the stone and making the architectural structures and inscriptions quite clear to assess.

After the discovery of this underwater city many geologists have presented the hypotheses that there was perhaps a substantial proportion of the Cuban island which is now submerged in the Caribbean Sea due to three separate events in the past centuries, and there was perhaps a straight stretch of land which actually connected the Yucatan peninsula in Mexico to the Caribbean island of Cuba.

The bottom of the structure lies flat like a plateau and is thought to be a mud volcano which lies 650 to 700 meters below sea level and has a strongly marked geological fault line, a preferred choice for building civilized nations because the soil at the base of the volcano is considered to be extremely fertile.