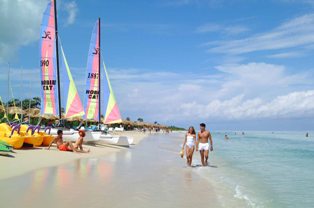 A popular summer vacation spot was created in the city of Varadero Cuba in the 1940s but the concentration on hotels, facilities and infrastructure of the city were greatly enhanced in the last decade making it a diverse and high quality vacation resort.

This beach city pulls tourists towards it in droves due to the beautiful coastline that it has to offer. Apart from that there is an adventure in every corner of the city for the brave and courageous beach lovers. You can explore caves and visit the many escarpments and secluded caves of this beautifully preserved coastal city.

Varadero Cuba lies at the northeastern edge of the Cuban peninsula and is surrounded by cities of Cuba which have many icons of culture, history and the relaxing environments of spas which let you soak in the beautifully preserved landscape of this island city.

If your corporation wants to hold an annual conference then the American Plaza in the city can facilitate your conference requirements. The Freeport has excellent weather and natural conditions for indulging in scuba diving, lounging on yachts and enjoying various water sports along with indulging in fishing in the deep sea.

How to Arrive at Varadero Cuba

You can reach Varadero Cuba by taking direct flights from North America, Central America as well as Europe and Africa. There are also flights which land at the Juan Gualberto Gómez International Airport and come directly from South and Central America.

A beautiful stretch of natural landscape runs from the Cuban city of Varadero and links it to the city of Havana which is only 134 km away. There is a skillfully constructed Central Highway as well as the National Throughway which provides a complete network and links the city of Varadero with the rest of the country.

There is an option of coming into the city by using one of the three marinas that are available for accessing the coastline of this city. These include the Puertosol Dársena de Varadero along with the Gaviota and the famous Chapelin.

Sites to Enjoy At Varadero Cuba On Vacation

Explore the Hicacos Peninsula which lies in the Western region of Cuba and falls in the Matanzas Province. This island is segregated from the mainland through the man-made canal which serves the purpose of linking the Florida Straits with the Bay of Cárdenas.

The northeastern side of the Hicacos Peninsula is home to the Hicacos Point Natural Park which is considered a preserved area since 1974. All 312 hectares of this preserved ecological area has different local and endemic flora and fauna of this region’s rich ecosystem.

It is home to caves and lakes along with salt works and different legendary cacti. The Patriarch cacti is over 600 years old and this is a landmark feature on Hicacos Point on this ecological reserve.

The lake in this park houses 19 migratory bird species and 24 species of reptiles in the Mangon Lake. One of the first saltworks of this region which was mined by the Spaniards during the conquest was the La Calavera (Skull) Salt Works.