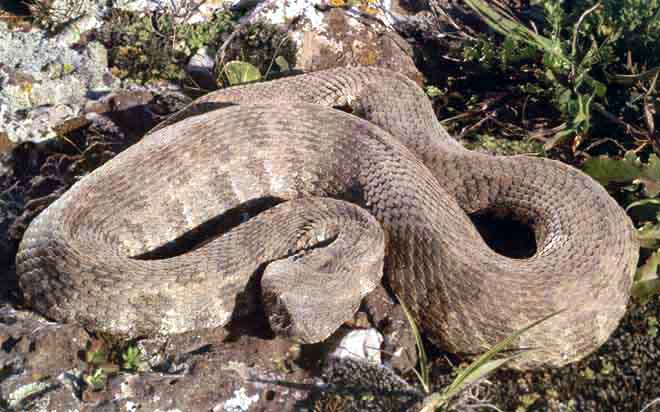 The Blunt-Nose Viper is the most dangerous snake to humans in North Cyprus. This viper is large and has yellow and brown coloring with two rows of dark spots. The Blunt-Nose Viper can grow to be between 3 and 5 feet. If you disturb the viper in any way it will hiss and attack quickly. The viper also likes to hide around boulders, bushes and near streams. What makes the Blunt-Nose Viper so dangerous is not the bite itself but what happens when you try to treat it. After it bites, the viper’s teeth remain in the wound. When the fangs are removed a large dose of venom is released into the wound. If bitten by the Blunt-Nose Viper seek medical attention immediately.

Another snake that lives in North Cyprus is the Cat Snake. This snake is not as dangerous as the Blunt-Nose Viper but is still venomous. The cat snake is very active at night and likes to sleep near streams and warm places. You can identify the cat snake by its markings, which are yellow and brown, and if the snake has a large head and eyes. The cat snake mainly eats lizards and small mammals.

The last of the venomous snakes is the Montpellier snake. This snake can grow up to 7 feet long. Its bite is not dangerous to humans but its venom can cause swelling at the site of the bite.

There are three types of North Cyprus snakes that are non-venomous. These include the Ravergier’s whipe snake, the large whip-snake and the Cyprus whip-snake. Ravergier’s whipe snake, or the coin snake, has olive skin with dark spots along its back that look like coins. The large whip-snake lives in open areas where there is little undergrowth to hide it. Its coloring is a light to dark brown. The Cyprus whip-snake is dark green and lives mainly in forests.  It prefers to be near streams and marshes.

Be careful when walking through bushes or climbing over large rocks. If bitten by a snake, it is important to seek medical attention as soon as possible, even if you think the snake is not venomous. North Cyprus snakes are just like many snakes in the world: if you leave them alone, they will return the favor.

Cyprus
North Cyprus is a country that is located along the Mediterranean Coast, just south

Cyprus
North Cyprus has numerous visitors from around the world each year. With these visitors

Cyprus
Scuba diving is a fun and exciting activity for anyone who loves the ocean.