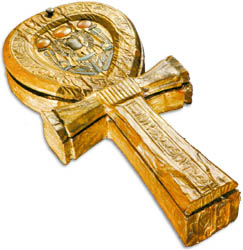 Want to learn more about the ancient Egyptian Ankh symbol? Read on for facts and info on one of the most important symbols from ancient Egypt…

The symbol of the ancient Egyptian Ankh is one of the most familiar hieroglyphics from the history of Egypt. In terms of its appearance it is reminiscent of the symbol of the cross that is supposed to represent Christianity with the only difference being a loop above the top bar.

There are many theories and legends regarding the origin of the Egyptian Ankh symbol. Some suggest that it is the manifestation of sexual symbolism. Others suggest that it is a representation of an elaborate bow much in the same manner as the knot of Isis. Many ancient hieroglyphics give a very detailed depiction of the symbol of the Ankh. Some of them clearly go to show that the lower section of the symbol is actually composed of two parts and these two parts are the end of a bow. The earliest examples of ancient Egyptian hieroglyphics actually depict the Ankh as being separated from the ends. This is the reason why Egyptologists believe that originally the symbol must have had some of religious significance in the form of a knot.

A deeper meaning of the symbol reveals that it may actually be representing life-giving elements such as water and air. In many hieroglyphics the symbol of the Ankh is shown as being presented upon the lips of the King thereby representing the “breath of life”. Historians have also been able to find a number of anthropomorphic pictures from ancient Egypt. In these pictures the ankh is shown with an ostrich feather fan that is composed as the backdrop of the picture with the Pharaoh in front of it. Such pictures depict a variant meaning of the symbol.

Another unique way in which the symbol has been represented was in the form of chains wherein which a number of Ankh symbols are consecutively linked to each other. Such patterns are commonly depicted on water vessels through which water is being poured thereby symbolizing the power of water. Archaeologists have also been able to find examples of libation vessels that were actually created in the form of the Ankh symbol and used for religious ceremonies.

The significance of this particular symbol can be seen in the fact that many different everyday use objects were purposely created in the form of the symbol. This included all kinds of items ranging from those that were typically used in royal and religious ceremonies whereas on the other hand the common man would also have a number of items either made in the shape of the symbol or carrying a pattern or print of the symbol. The list of items that were commonly seen in the shape of the Ankh symbol included mirrors, sistrums, spoons and other crockery items.