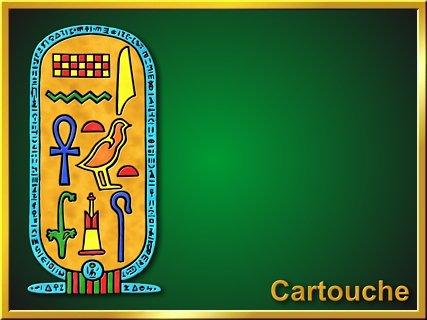 Want to learn more about Ancient Egyptian Cartouches? Read on for facts and info on this unique burial custom and discover the significance of an ancient Egyptian cartouche…

Cartouches were a special kind of hieroglyphics that served as written birth records for persons of high status in Egyptian society at a given time. These hieroglyphics would be made in the form of an oval plaque which had a line at the end indicating the position of the individual in the royal hierarchy.

Traditionally all the Egyptian pharaohs would have a total of five names. The first name would be assigned at birth and the following four would be given once the individual took office as the pharaoh of the kingdom. The assigning of names was actually a method of commemorating the transformation of the individual from a mere mortal to a divine deity according to ancient Egyptian beliefs. However the most important name for every Egyptian pharaoh was the one assigned to him at birth and it was this name that was most commonly etched onto the ancient Egyptian cartouches.

Cartouches were not part of the Egyptian culture in the first three dynasties. Rather it was king Snerfu who innovated this practice in the fourth dynasty. Another interesting fact to note is that the Egyptians never assigned the term “cartouche” to these hieroglyphics. They referred to it as the oblong plaquehenu and it was much later that Napoleon’s soldiers came up with the term “cartouche” for the hieroglyphics.

Prior to the innovation of the cartouche system the Egyptians made use of another concept for recording the birth of significant personalities from the Egyptian royalty. This was known as the sekekh. Archaeologists have been able unearth serekhs belonging to the very first Egyptian dynasties. The serekh samples had a number of different ancient Egyptian symbols meticulously crafted upon them. The most prominent symbol to be showcased on the serekh was that of the Horus. This was one of the most important deities for the Egyptians and was considered to be the protector for the ruling authority, his kingdom and all his subjects.

The Importance of Ancient Egyptian Cartouches

The ancient Egyptians attached great reference to the cartouches. The common notion amongst them was that placing the cartouche at a particular site would ensure its protection. They would often place the cartouche upon the tombs of the Egyptian elite. It is because of this practice that archaeologists have been able to identify tombs of the royalty and learn about the mummies that lay inside the graves.

For example one of the most important discoveries that archaeologists were able to make was the Rosetta Stone cartouche hieroglyphics. This amazing discovery was made in 1799 and showed that the Rosetta Stone was set up in commemoration of Ptolemy V. This was one of the most important archaeological findings with regards to ancient Egyptian civilization because it paved the way to effectively translating the hieroglyphics that were commonly used by ancient Egyptians.

The discovery of cartouches also resulted in the discovery of treasures such as jewelry at the burial site. Archaeologists suggest that the reason behind this is the belief of the ancient Egyptians with regards to the cartouches having the ability to protect the site at which they were placed. Hence they would also keep their valuables along with the cartouches so as to ensure that protection.