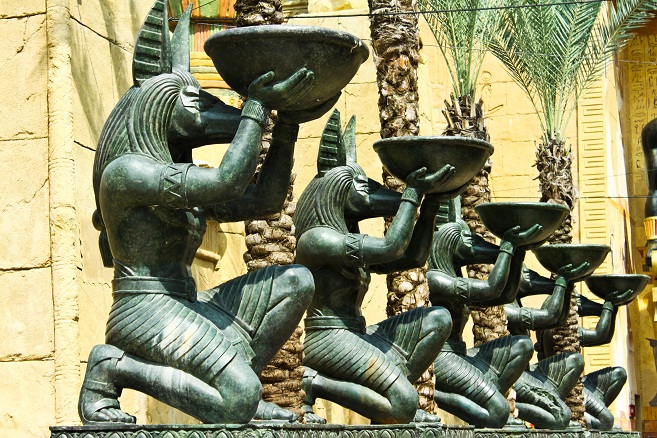 The Egyptian jackal is both a very significant mythological character in a different history as well as an endangered species of jackal that is native to the country of Egypt. It was once found all over Egypt, Libya as well as the entire Arabian Peninsula but the population has significantly decreased due to over hunting which has reduced the Egyptian jackal into an endangered species.

The ancient Egyptian jackal can be seen depicted in the form of a jackal headed god that was popularly known as Anubis. The majority of descriptions show the jackal headed god with a black colored head that is characterized by its long ears along with a pointed muzzle just like the actual animal. Anubis the jackal god is regarded as being one of the most significant mythological symbols of ancient Egypt.

The Egyptian jackal was characterized by its lanky structure and a thick fur coating. It appeared to be grey-beige in color although a dirty yellow shade may also be found. It had characteristic long and pointing ears that could be seen from a distance extending above its thin body. The locals referred to the Egyptian jackal as the wucharia. The Saharan wolf is considered to be a subspecies of this ancient animal.

Although lanky in its appearance the jackal is relatively heavier and larger than other species. Many critics argue that the Egyptian jackal should actually be classified as a smaller Desert wolf rather than a breed of jackal. This is primarily because of its dental measurements and the Carnal nature of its dentures.

A number of elements from the physical structure, caused scientists to consider it as a variation of the gray wolf. These were primarily its large ears, long legs and a body that resembled that of a wolf more than that of the conventional jackal. Nonetheless scientific research has proved it to be closer to the breed of jackals than wolves.

Today the ancient jackal can hardly be seen. The largest population of this species was in the western desert of Egypt and other areas such as Kharga, Dakhla and Siwa as well as certain areas near Cairo. Although the animal has now made it to the endangered species list because of over hunting yet there are no laws that restrict the hunting of this animal in Egypt.

Egypt 0 132
Want to learn more about Egyptian astrology? Read on for a historical overview on

Egypt 0 35
Need information on ancient Egyptian remedies? Read on to discover the treatments and surgery

Egypt 0 88
Want to learn about Egyptian embalming? Read on to discover the art of mummification

Chinese Calligraphy Symbols
China
Discover the brilliance of Chinese calligraphy symbols, their history and their usage in today’s
0 14213

Chinese Family Symbols
China
The Chinese symbols for family occupy a special place in their culture. Find out
0 5895

Rare Argentina Stamps
Argentina
Interested in rare Argentinian stamps? Want to know which stamps from Argentina are most
0 5852

Ancient China Social Classes
China
Interested in the social structure of ancient Chinese? Want to know more about the
0 2984