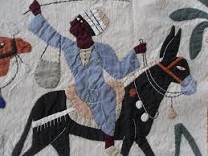 Want to learn more about Egyptian appliquÃƒÆ’Ã‚Â©? Read on for facts and info on this traditional form of art practiced in Egypt…

The craft of ancient Egyptian appliqué has an interesting historical background. The art form did not originate from Egypt rather it was brought to the region through the hands of the Asiatic nomads. The ancient art form has been in continuous practice ever since and even today you will find tentmakers to be utilizing the same old techniques to create Egyptian appliqué artwork.

Appliqué artwork was originally practiced by Arab nomads that used the traditionally practiced craft to adorn the interior of their tents. However with the passage of time the importance of tents has declined and the traditional craft of appliqué cannot be utilized the way it was before. In order to keep the ancient art form alive the artisans have taken to designing a host of household decoration items based on the same artistic traditions.

Such items are characterized by the use of brilliant colors that were commonly used in Islamic art as well as ancient pharaonic art. The particular word that is used to describe this unique art form is by no means Egyptian. Rather this term was coined by the French following the conquest of Egypt at the hands of Napoleon back in the 18th century.
The art form consisted of a number of patches of different color fabrics that were sewed upon another fabric that had a solid background color. The patchwork would be composed in such a manner so as to create a unique design or scenery. Ancient Egyptian appliqué is not to be confused with another closely associated art work known as patch work. Patchwork basically evolved as a decorative means of repairing damaged fabrics where pieces of cloth would be sewn upon the ruined area to super impose a creative design.

Over the years the ancient craft of appliqué has been struggling to retain itself as an art form. Many Arab countries have given up on this ancestral art form as it cannot be utilized for the same purpose for which it was innovated. The only region where appliqué is practiced now is Egypt. In fact most Arab countries import appliqué household products directly from Egypt rather than create their own.

Specific regions in Egypt are renowned for their appliqué work. Amongst the most popular places is Kheimiya Street which has been existing since 1650. Then you have Bab Zweilla which was developed by the Fatimids further back in 1092. In these areas you will be able to find a wide variety of household products decorated according to the ancient Egyptian appliqué style. The range of products includes quilts, cushions, bedspreads, pillow cases and not to forget, tents as well.

Most of the people involved in working with Egyptian Appliqué in today’s times are family run businesses where the craft has been handed down the generations. Such people prefer making use of the traditional techniques even though modern machinery can be used to make the work significantly easier. They believe the traditional way of creating Egyptian appliqué adds more charm to the products and thus they are considered to be more valuable.