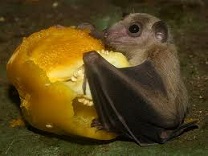 The Egyptian fruit bat is classified as a unique species from the collection of old world fruit bats that are commonly found across Africa. They are also found throughout the Middle East, various regions of the Sahara, Pakistan as well as some places in Northern India.

Male bats tend to be larger in size when compared to the females. They can easily be identified by a large scrotal sack that distinguishes the males from the females. The body of the bat is light brown in color and the wings are a shade darker. The Egyptian fruit bat sports a pair of large and pointy ears which are complimented by dark eyes. The bat also has a long muzzle much like that which is normally found on dogs. It is because of this unique muzzle that the Egyptian fruit bat has earned the title of flying foxes. The fur on their body has a very soft texture and their wings are extremely thin.

Bats by their very nature are nocturnal creatures and the Egyptian fruit bat in this regards is no exception. Day time is typically spent inside caves and trees where large groups of bats spend their time roosting. The groups can number in the thousands. As evening approaches the bats leave their caves and scrounge the forest foliage for food. They make sure to return to their caves just before dawn. When resting the bats hang upside down and wrap their wings all around their bodies.

Egyptian fruit bats are part of the genus Rousettus collection. They are unique in the sense that they are the only bats from the megachiropterid family to use echolocation. The bats emit a series of sounds that resemble sharp clicks. They achieve this by making a movement with their tongues. The clicking starts off slow and speeds up as the bat draws closer to an object. The talented bat has plenty of tonal variations in its vocalizations which it uses for communication. The spectrum of sounds varies from screeches to grunts.  Large colonies of bats give out a cacophony of sounds that can be heard to quite a distance.

This species of bat is classified as a frugivorous species and as the name suggests it feeds on fruits. These bats are known for consuming large quantities of fruits each day. Amongst the favorite fruits of the Egyptian fruit bat are dates and generally all other fruits that are soft and pulpy. In general they gain access to unripe fruits that have been damaged due to insect or fungus infestation.