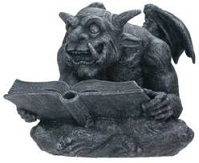 Egyptian gargoyles were utilized mainly on top of the roofs of buildings and architectural structures to direct the overflowing water away from the wall and foundation of the building. The aim was to prevent the building from eroding due to constant spilling water from the rooftop. These creatures were utilized to decorate any waterspout which was in open view. They were perhaps considered more appealing to the ceramic or wood-based waterspouts which were utilized before the invention of stone carved and ornamental waterspouts.

Universal Appeal of the Gargoyle

Gargoyles have been noticed throughout architectural history in Greece, Rome, Britain as well as Egypt. The Egyptians were perhaps one of the first ones to create images based on these ugly creatures and incorporating them in their architecture as well as frescoes. In Greece the deities and hybrid creatures were utilized for this purpose and included griffins, centaurs and chimera.

Since the statue of the griffin was related to the protection of wealth, they eventually started cropping up in pairs at the entrances of treasuries and rooftops of temples. The gutter spouts were occasionally decorated with lion heads to aid the flow of rooftop water to drain out. The lions were utilized to depict the building and add strength to it.

The first gargoyles were noticed in the 12th century and the shapes have evolved over the years. The gargoyles became longer in size and as the craft of sculpting improved and materials abounded, they have become more finely carved.

All over the world there are more animalistic gargoyles rather than human-based figures. This is mainly because water is flowing through their mouth and it would be considered an insult to one of the Egyptian deities to be considered a water spout!

Functions of the Egyptian Gargoyle

The Egyptian gargoyle served many functions. The primary utility was as an architectural adornment for waterspouts. However, that is not what they’re commonly utilized for in present times. Apart from this they were utilized to depict religious symbolism and educate the masses about different kinds of deities. Whenever they were utilized in concealed areas, on the back side of temples or high up on the roof, it was mainly for the benefit of pleasing the pagan gods rather than appealing to the human sense of style. The idea is that these pagan gods are all-seeing so the place of worship and important structures should be perfect in all aspects whether visible or hidden from view.

These gross images were usually those evil creatures who redeemed themselves and submitted to the gods to protect people thereby acting as sentries. They also served as a reminder to those who committed sins that he would eventually be turned to stone and attempted to work on the human subconscious and instill fear.

The themes utilized in Egyptian architecture were mainly that of pagans as well as religious deities. The Egyptian god of light called Horus is depicted in his animal form which is the falcon which flies out and destroys the crocodilian dragon.

The different types of gargoyles include animals, humans and hybrids. Materials utilized for creating gargoyles in ancient times were basically marble and limestone and some of these survive till today. Apart from this the ones created out of terracotta and stone have eroded beyond repair.