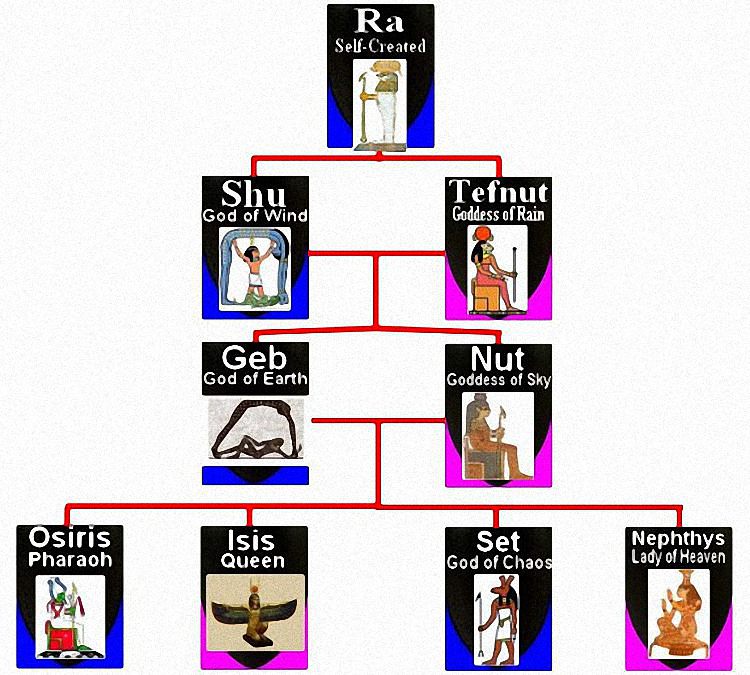 The Egyptians followed a polytheistic belief system within which they had numerous gods. These gods were created as manifestations of the attributes of one god in many different forms. The many gods were further classified in an hierarchy and had a specific family tree.

Some of the most important Egyptian gods in the order of their hierarchy are as follows:

Ra is perhaps one of the most important and ancient Egyptian gods. He is considered to be the supreme solar deity and the King of the Gods. The worship of Ra has been prevalent in Egypt since the Pre Dynastic period. He is also regarded as being amongst the creators of the world by the Egyptians and the kings and pharaohs of Egypt would consider themselves to be “Sons of Ra”. He was depicted as a falcon that was crowned with the sun disk.

The Sun God Ra was followed by the pair of Shu and Tefnet. Air was the domain of Shu and he was symbolized as the Eye of Ra. He was often shown depicted as a lion and had the center of his cult positioned in Heliopolis, Leaontopolis.

Tefnet was also considered to be the eye of Ra and was symbolized in a number of different ways. Ancient hieroglyphs show her in the form of a lion, cobra, ram and spitting lips. The center of her cult was the same as Shu as she was her female counterpart.

Next up was the pair of Geb and Nut. Geb had the earth as his domain and was considered to be the Great Cackler. He represented the Fertility Human and was symbolized by the Goose. The center of his cult was in the Delta, Heliopolis.

Nut was Geb’s female counterpart who had the sky as her domain. She was represented with the symbol of a woman and shared the same center of her cult as Geb.

Osiris and Isis were the next in line. God Osiris was considered to be the Lord of the Dead and was associated with the afterlife and rebirth. He was represented as the Agriculture Human and had Mummy Busiris, Abydos as the center of his cult. Isis was the magic woman of Egypt associated with Osiris.

Seth was the god of all evil and darkness. He had power over wind, chaos and storms. He was depicted as a mixture of various animals including the hippopotamus, black pig, crocodile, jackal and the dog.

Nephthys was his female counterpart and was regarded as being the “Lady of the House”. She was taken as a protection symbol and also assumed the title of the Funeral Women.

The last and final deity in the Egyptian gods family tree is Horus. Horus is one of the most important gods in ancient Egyptian mythology. He is considered to represent the Divinity of the Pharaohs. The center of his cult was Hierakonopolis, Behdet.