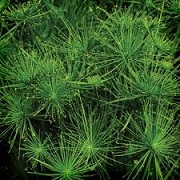 Classified as perus papyrus in the world of botany, the Egyptian papyrus plant is a monocot from the sedge family of Cyperaceae. Native to the hottest regions of Africa the papyrus plant is herbaceous perennial. It appears grow much in the same manner as swamp vegetation in the form of reeds and stands in shallow water.
Human beings have been making use of Egyptian papyrus plant for many centuries and the Egyptian civilization is credited as being the first people to make use of this highly versatile plant for many different uses. The papyrus plant was used for the purpose of making papyrus paper and different parts of the plant were consumed as ingredients in many food items and they would also be used to create herbal remedies. Certain parts of the plant, such as the stems were used for the purpose of creating boats. Today the plant is considered to be an ornamental plant.

The plant grows as a tall and leafless yet robust plant that is classified as being an aquatic plant. The average height of the papyrus plant ranges between 4 to 5 meters long. The plant grows clumps of grass like substances that grow upon triangular shaped green colored stems.   These stems erect from thick and woody rhizomes that stand in shallow swampy waters.

Upon each stem is a cluster of bright green colored and thin stems much like threads that can go up to 30 cm long. At a young age the vegetation on the stems of the plant actually resemble a feather duster. As the plant matures it grows flower clusters in greenish-brown color that form at the end of the rays. Following this the papyrus plant sprouts brown colored fruits that appear to be like nuts.

The parts of the plants that are still at a young age form red-brown triangular scales at the rhizome which have a papery texture. The base of the stems are also covered with these scales. Although the plant is regarded as being a leafless plant, botanists have actually classified the scales as reduced leaves.

Use of Egyptian Papyrus Plant

The papyrus plant was used for a wide variety of purposes. The most notable use for the plant was however for the purpose of making papyrus paper. The paper, known as Cyperus papyrus is today used for decorative purposes only and is no longer created in its place of origin which was the Nile Delta. Syria was another region that experienced a rich cultivation of the plant and it was also to be found on the river beds of Niger and Euphrates.

The papyrus plant had a number of different varieties and the Egyptians would make use of the different varieties for various purposes. For example the subspecies which produced flowering heads were cultivated for the purpose of making garlands that were used in religious ceremonies. The pith from the immature plants was consumed as food. On the other hand the Egyptians would also create a number of utensils such as bowls using the woody root of the plant. The roots were also used as fuel and the strong stems could be used to build everything from boats to sails and cordage to sandals.