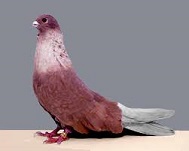 Up until the 1980s it was unclear as to when Egyptian pigeons were first recognized. However a leading geneticist by the name of Dr. W.F. Hollander conducted a research in which he found a copy of a pigeon journal dating back to 1886 by the name of Mekkatube-Duerigen. In this book he found exact descriptions of the Egyptian Swift species as they are seen today. The historical record of the handwritten book has been preserved through the generations. The Egyptian Swift was just one of varieties of pigeons that were mentioned in this book.

In 1938 Mustafa Gahnem conducted an individual effort that provided more updated information on the standards of the Egyptian pigeon. Today you will be able to find comprehensive booklets about this particular breed of pigeons in libraries across the world.

The standards for the flying Egyptian pigeon are somewhat different. The body of the flying pigeon is not as skinny nor is it as densely covered with feathers as is the body of the show bird. The flying bird is generally about 2 inches shorter in height than the show bird and has a far more compact body that does not display any feathers loosely attached to the body. Unlike the show bird, the flying bird has been longer legs and a larger head. Cross breeding between these two versions of the Egyptian pigeon is common in Egypt. The purpose of crossing the two varieties is to develop a bird that has excellent flying ability and yet some prime show qualities.

Although the crossing practice has in many ways achieved this objective yet some qualities do get compromised. In general it has been observed that the crossed pigeons acquire almost all the beneficial flying abilities but some show qualities are eliminated.

This is but natural that some features like long feathers that are considered to be an excellent show quality will actually hamper the flight of the bird and hence need to be eliminated in order for the bird to be good at flying.