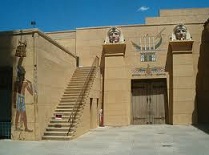 Want to learn more about the Egyptian revival? Read on for facts and info on this distinctive style of architecture inspired by ancient Egyptian imagery and motifs…

The title “Egyptian Revival” has been assigned to a distinct architectural style that takes inspiration from ancient Egyptian imagery and motifs. Europe started to develop an infatuation with ancient Egypt following Napoleon’s conquest of the land.

Today you will be able to find many structures that take inspiration from ancient Egyptian trends. Perhaps the most notable of these is the Bernini’s Obelisk situated at the Piazze Navona in Rome. Following the erection of this obelisk the monument came into use as a funerary memorial monument. It was used for this purpose at the funeral of Sir Edward Lovatt Pierce in 1717 in Ireland. A number of other obelisks were erected in Ireland in the eighteenth century. The Casteltown Folly situated in the County Kildare is by far one of the most popular obelisks in the region.

Architects have also taken inspiration from Egyptian buildings that have been made to appear in the form of garden follies. The most extravagant garden follies based on the Egyptian revival style is the Chateau de Montbeliard built by Duke of Wurttemberg. The garden had a beautiful Egyptian bridge which guests have to cross over. The bridge leads to an Egyptian island which has a classic Egyptian style swing along with a bath house built according to ancient traditions.

Following the wake of Napoleon’s invasions the number of art works and architectural structures that were modeled on Egyptian revival style multiplied manifold times in Europe. Scores of structures were now resembling Egyptian architectural traditions.

It is believed that the first building to have been constructed according to the Egyptian Revival style was actually a newspaper office known as The Courier. The office was erected in 1804 at the Strand in London. The most distinct part of the structure was the cavetto and cornice along with a pair of pillars that resembled Egyptian palmiform capitals.

The Temple of Place des Victoires is however the most important Egyptian Revival building in France. It was erected as a memorial to two generals namely Kleber and Desaix. The temple features a corner stone which was placed in the year 1800. The city of Paris also has its fair share of Egyptian revival buildings such as the Fountain at Fellah built back in 1812.

Another popular Egyptian revival structure in Europe is the Egyptian Hall of London. This structure was completed in the year 1812. It is complimented by an Egyptian Gallery where a fantastic collection of Egyptian antiquities are displayed.  A cemetery at Highgate also shows definite influences of the Egyptian revival style which goes to show how popular the style had become amongst the Europeans.

The historic imagery and motifs from ancient Egypt continue to inspire modern architects as there has been a drastic increase in the number of pyramid-like buildings and shopping malls based on classic motifs from the Egyptian culture.