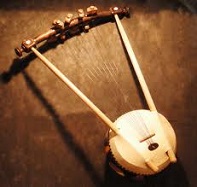 Want to learn more about Egyptian stringed musical instruments? Read on for facts and info on the most popularly used stringed instruments in the history of Egypt…

Egyptian harps had a number of subdivisions but in essence there were two different kinds of construction styles used for the production of the harp. One of these was the angular harp which was actually imported from Mesopotamia. However the indigenous Egyptian harp was the arched harp.

The arched harp has remained the most popular stringed instrument in Egypt throughout its history. It consisted of a curved rod that was fitted against the sound box. The rod had a series of collars along its length at the top. This was where the strings were attached. The collar could be rotated to tune the strings.

The number of stings that the Egyptian arched harp used could vary anywhere between six to ten. However the nature of the instrument is such that all strings produced the same pitch hence all melodies seem to be composed on a very limited set of pitches.

During the Old and Middle kingdoms the use of the shovel shaped harp was quite popular. This version of the harp allowed for a greater variety of tonal ranges. Small harps were produced to deliver high pitch sounds whereas larger harps had low pitched sounds.

The angular harp was developed in Mesopotamia back in 1900 BC and made its way into Egypt by 900 BC. The main difference between the angular harp and the arched ones was in the construction as well as the number of strings that each harp could be fitted with. The angular harp had the capacity to hold up to 29 strings which allowed greater tonal variations which was the reason behind its popularity.

A total of three different kinds of lyres have been discovered from ancient Egypt. They were categorized according to their sizes ranging from a thin lyre to a thick one and then the giant lyre. They were initially developed in Syria back in 2500 BC and made their way to Egypt by 1900 BC.

The thinner version of the stringed instrument was the most rarely used lyre up to the 18th century. It is believed that the thin lyre was known by the name of Kinnarum in the New Kingdom. Egyptian hieroglyphics depicting this particular instrument has been found on the tombs of the poor people of the region. This goes to show that the thin lyre was considered to be a low status instrument.

The use of the lute began in Egypt around 2000 B.C. This instrument was one of the later stringed instruments to be introduced in Egypt and was almost always only played by the women. The instrument was known as gengenty in the local language and was actually imported from the Near Eastern lands.