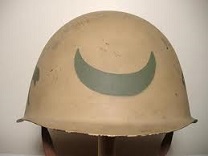 Interested in the Egyptian War Helmet? Read on to find out the difference between the military Egyptian war helmet and the helmet of the Pharaoh…

Egyptians have raged many a war with their enemies. They were skillfully prepared in terms of military equipment as well as defensive architecture like secured fortresses. With regards to their defense equipment they had access to three basic kinds of equipment. This included full length shields, spears and body armor which was rarely supported by Egyptian war helmets. Apart from this there were many siege shelters which started appearing towards the end of the dynastic era.

In Egyptian tradition the head is seldom covered with the exception of the Pharaoh. They were different headgears which were utilized during times of peace and war. The Pharaoh wore the Blue Crown which was his war helmet created from leather or high quality cloth and covered with many golden discs. The helmet worn by the Pharaoh was constructed out of high quality leather and had many small metal rings. The front part on top of the temple protruded outwards and the back offered protection at the nape of the neck and the back to prevent a sword or arrow from injuring him.

In the Dynastic era of Ramesses III he commissioned the distribution of Egyptian war helmets for his troops which had decorations of cords and amulets. The body armor was similar to the Asiatic style with a leather under coat reinforced with small metal scales. Unfortunately these offered zero protection against spears and arrows leading to many losses in battle. The hieroglyphics rarely show the Egyptians wearing helmets.

Basically the defensive material utilized in wars by the enemies of Egyptians was the catalyst for the development of military defense equipment by the Egyptians. When they had to tackle different kinds of army which were equipped with high quality body armor and war helmets, they had to find weapons which could cut through this armor and deal a deadly blow to the opponent. One of the prime examples of such a weapon is the creation of a battle axe which was used to cut through the armor.

This was a refined version of the original blunt mace used by Egyptians and this later evolved into a piercing axe utilized in the battles. Most of the enemies of Egyptians were light armored and the inexpensive weapon of the bow and arrow was utilized to target these opponents.

Amongst other projectile weapons the Egyptians had developed very heavy and high quality spears which could penetrate the thickest of battle armor as well as helmets. However, these were seldom utilized unless there was a standoff with a heavily equipped and armored enemy force.

The Egyptian military was equipped with chariots known for their controlled and violent attacks on enemy lines. Furthermore they were equipped with ox drawn wagons which were utilized to transport boats. The Egyptian army had a huge collection of boats for wars waged across the Euphrates and Nile River. In all, the ancient Egyptians were well oiled war machine which attacked many a civilized nation due to their continuously evolving military technology.

With their conquests they developed a reputation of being a highly respectful military which was trained to match some of the best armies of the Late Period. Due to the interesting the evolving military defense equipment utilized by the Egyptians they gained access to many lands and the empire eventually reached all the way to the Euphrates River.