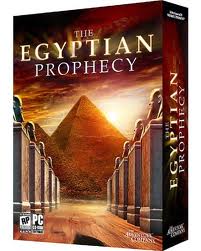 Want to learn more about the Egyptian prophecy? Read on for info about this interesting video game based on an ancient Egyptian story…

The Egyptian prophecy is the name of an adventure videogame developed by Keops Studios in 2004. It is basically a first-person point of view game where you have to control your character using the mouse complemented with node base movements. Characters will interact with each other through conversations as well as cut scenes.

The game is available in three CDs and you can make unlimited saves in the game. It was lauded for its fast loading times and the fact that you really don’t lose out if you die in the game because you are restored from the point where you died. One of the things that contributed to the popularity of this game was the fact that it did not require an extremely powerful video card to run and could function to its maximum potential with a mere 32 MB Ram.

The game has a background story that took place during the rule of Ramses II. This particular ruler had one of the longest ruling periods in the history of Egypt that lasted from 1279 BC to 1212 BC. Ramses II is credited for being a great builder and managed to construct a number of great architectural structures during his reign. He is particularly noted for the many temples that he erected.

The story of the game is that Ramses II had fallen ill and needed a way in which he could extend his life. The Egyptian God Amon-Re makes a proposition to the king. He promises to extend the life of Ramses II if the king builds a temple in his honor. However a number of unfortunate accidents pose significant problems at the building site because of which the construction process is delayed. The overseer of the construction process also gets injured during the accidents and the challenge now faced by the Egyptian king is that he is short of time and the illness is getting fatal. If he fails to complete the temple on time he will not be granted the extension of his life.

This is where the player steps in, in the form of a young priestess by the name of Maya. Maya’s job is to unlock the secrets and the mystery that is causing the most important people of the town to fall sick. It is understood that an evil plague is haunting the temple and the only way to ensure the timely construction of the temple is to find the source and eliminate it so that Ramses II can be saved.

During the process of the game Maya has many mystical visions and is made to enter into different dimensions where she communicates with different Egyptian deities. Since the deities cannot directly make a contribution in the physical world they direct Maya to perform the tasks that will help to rid Egypt of the evil with which it has been plagued. Along the way Maya is tested by the gods for her sincerity and is forced to complete some unusual puzzles as well. When she manages to complete a particular test she is given useful information which you can use to cause a change in the real world.