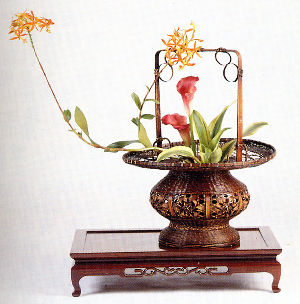 Interested in knowing about Chinese flower art? Read on to get an insight into the development of the art form through the ages and the different styles that are popularly used.

The country of China is renowned for developing some of the most unique art forms known to the world. Amongst these art forms is the incredibly unique form of art known as Chinese flower art. The Chinese have always been known to posses a deep love for nature and it is from this very fascination with the natural world that this unique art draws its inspiration.

The art form originated more than two thousand years ago. It really began to flourish under the Sui and Tang dynasties which were times that China enjoyed a relatively peaceful environment. It was during these years that Chinese flower art became a prominent part of Chinese culture.

Over the years Chinese flower art has undergone many changes. Under the rule of the Song dynasty the art form had become so common that the intellectuals and the layman were all enjoying unique flower compositions as a means of decorating their homes. Flower art reached its peak during the Ming Dynasty. During these years many new innovative techniques were evolved and it developed into a well established formal art form.

In the years to come China was tangled up in wars and that led to the decline of flower art as the masses had other things to worry about. The art form almost faced extinction under the troublesome times of the Qing dynasty but started surfacing again once the country began to make an economic comeback.

The plant canvas and different styles

The Chinese flower artists would get their flowers from the woods and meadows that offered them a wide variety of species. There was however a well preserved etiquette that the Chinese practiced with regards to the picking of flowers. The various flowers available to the Chinese artists gave them the opportunity to come up with unique compositions that represented definite concepts.

The general design principles that are used to judge any work of art are also applied to flower art. The scale of the flowers to the vase is something that is taken into account. The quality of the flowers and the way in which they are used to compliment each other is what makes each composition different from the other.

When it comes to Chinese flower art we find there to be four distinct types of flower arrangements that are commonly used. One is the line arrangement style which makes use of a couple of flowers, their leaves and buds which are arranged in a natural manner so as to display their characteristics.

Composite bouquets are also known as mass bouquets. This kind of arrangement involves creating compositions based on texture and color. Another unique style is one where only the heads and blossom ends of the flowers are used. These are displayed upon flat receptacles. This style is known as Platter bouquets. Geometric bouquets are another style of flower arrangement that make use of different design formats.