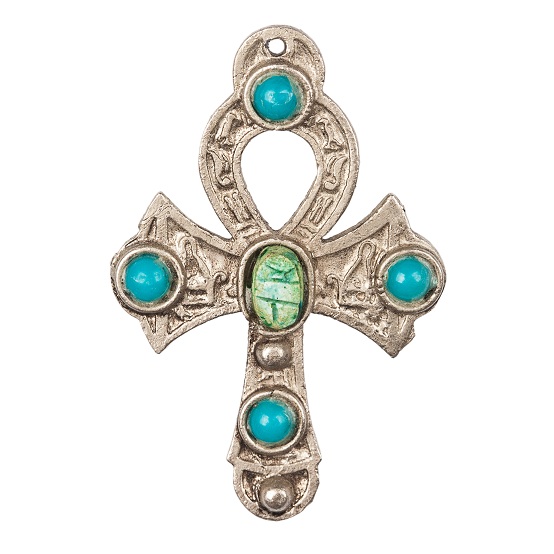 Interested in the meaning of ancient Egyptian symbols? Want to know what the most popular symbols from ancient Egypt mean? Read our guide for detailed facts & information…

Since time immemorial symbols have exerted preponderant influence on the fabric of ancient Egyptian culture and religion. Symbols were often used to depict ideas which would be difficult to elucidate through more concrete modes of expression. These ideas, thoughts, beliefs or perceptions often transcended the realms of reality. Egypt’s symbolic orientation can be confirmed by the fact that these symbols were not just used as architectural embellishments but they also held a sacrosanct place in rituals related to religion and magic. It can be emphatically suggested that any effort at understanding Egyptian culture would be half hearted without learning more about these symbols. So, here is a list of some of the most popular Egyptian symbols and their meanings…

This is perhaps the most popular inviolable symbol to rise out of Egypt. Authoritarians and Egyptologist have deciphered many possible meanings of this symbol which is a cross with a loop on top. Its ‘keylike’ appearance has given rise to its definition as the key to life and immortality The Ankh was seen in the hands of most ancient Egyptian gods like Isis, Osiris, Ra, Anibus and others.

The Ankh was used to symbolize eternal life or the existence of life in the netherworld. It is also used in Egyptian hieroglyphics to represent life and living. It is a very common sight to see a picture of a dead pharaoh and a god with the ankh symbol held by the loop offering it to the dead king symbolizing the eternal breath of life.

However a completely contradictory theory states that the ankh is a symbol of the male and female genitalia. The ankh symbols found in the New Kingdom depicted a triangular structure in the loop at the upper end. This was interpreted as a representation of the triangular female mound. The long stump that extended down was considered to be the phallic representation while the horizontal dissecting line stood for the children or the union between the male and female

A third theory states the ankh symbolizes the movement of the sun or more specifically the sunrise with the central lop representing the sun or Ra a principle deity in the ancient Egyptian Religion while the stump was used to depicted the path of the sun and the horizontal line was used to represent the horizon.

The Ankh bears a striking resemblance to the symbol used to represent Venus in the ancient Roman civilization. The symbol was eventually also used by the early followers of Christianity in Egypt as a variation of the crucifix. It was called the crux ansata.

The Eye of Ra or the Eye of Horus: This is one of the most prominent symbols to have risen out of Egypt. It has formed the basis of other symbols used by many other civilizations. For instance, the All Seeing Eye used by the Masons and the Eye of Providence on American currency Bills find their roots in this Egyptian symbol. The ancient Egyptians used it a protective and healing amulet. It was also used to measure medical preparations.

Most Scholars concur that the Egyptian Symbol of the primordial hill formed the basis for the construction of temples and the pyramids. The symbol is a depiction of a hill rising out of the sea of chaos to protect life. Needless to say it had a profound impact on the life and ideologies of the ancient Egyptians.

This symbol represents the suns orbit across the sky. The female dung beetle’s act of rolling a ball of dung across the ground before laying its eggs epitomized the movement of the sun across the sky for the Egyptians. Since the young ones seemed to appear out of nowhere when the eggs hatched it stood for spontaneous creativity; another attribute of the sun.

These are four of the principle symbols that can be observed across the tombs and pyramids of Egypt. But this list is far from being conclusive since numerous other symbols have still to find their place in it.