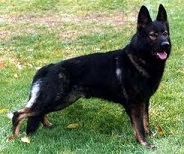 The German Shepherd dog black sable is one of the kind of pure bred German Shepherd dog. These dogs were bred in Germany and have become popular across the world because of their unique abilities and diverse appearances. The dog is generally bred for colder climates because it has four layers of fur which make up its coat.

Uninitiated German dog enthusiasts are mistaken in thinking that there is only one type of color or pattern available for the German shepherd dog. This is generally considered the combination of tan or red with black or the saddle back. Furthermore, it is interesting to note that these colors are considered those of the mixed breed, which has been crossbred with the Siberian husky or Labrador retriever. Generally the sable color comes from the Siberian Husky crossbred dogs while the solid black is a result of the crossbreeding with the Labrador retriever.

There is a very limited understanding of the gene which controls the color as well as the coat pattern of the black sable and other German Shepards.
There is a constant dispute revolving around the gene analysis of the German shepherd dog. There are different reports that have been published on the pattern and colors that the German Shepherd dog traditionally depicts. There are some co dominant, dominant and recessive genes in the body. If the dominant gene is present then it will override the others. However, in the case that it is not present, the recessive gene becomes the prevalent one and the physical characteristic is reflected in the dog. This is what brings about the color combination and pattern in the dog.

The saddle back is considered a recessive gene. If both the sire and dame are saddle back dogs, the result will be saddle back pups rather than black sable pups. Therefore, when you are booking your black sable German shepherd puppy from a credible breeder it is a good idea to check the parents and their previous litter to be sure of the result.

Furthermore, another factor is the type of gene which can be either homozygous or heterozygous. Each trait has two genes which means that the homozygous dog would have one gene for a coat pattern while the heterozygous dog would have two separate genes for the coat. As a result if thehHeterozygous sable dog had one sable parent and one saddle back parent it would have the black sable fur because that is the dominant gene. However, it can go on to produce sable puppies also because it has both the genes.