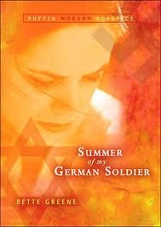 Summer of My German Soldier, written by Bette Green, was published in 1973 and was then made into a movie in 1979. It is a story of an unlikely friendship between a 12 year old Jewish girl and a German soldier…

Summer of My German Soldier is set in Jenkinsville, Arkansas during the second World War and is told entirely in first person by 12-year-old Patty Bergen, who is extremely unhappy with her life, as she has an abusive father and an arrogant mother, who either ignores her completely or only addresses her when she wants to highlight how unattractive looking she is. Patty’s family owns a shop in the town and this is their family business so to speak.

Despite her parents behavior Patty is not bitter and has a passion for life, which is not expected from a young girl in her situation and she often went down to the store to help. Her free sprit can be seen from the start, and is especially prominent when German soldiers, who are now prisoners of war (POW), arrive in Jenkinsville by train to stay in a POW camp established in the town. She is disappointed by the resentment the crowd present there shows them and is the only person who decides to wave at the soldiers, but is stopped from doing so by a woman present there. She does not understand what the fuss is about, as through her naive eyes, the soldiers look just like anyone else she might encounter in the town.

The soldiers are soon permitted to leave their camp to go get supplies from the nearby stores and a group of them ends up at Patty’s family’s store, on a day that Patty is helping there. Most the soldiers know little to know English; hence they nominate Frederick Anton Reiker to pay for the groceries, as he is the only one who is fluent in the English language.

Patty not only helps with the groceries but also strikes a friendship with Anton. It is not long before Anton decides that he is sick of living as a POW and that he must see his family. He plans an escape and is almost on a train to freedom, when Patty sees him and destroys his plans. However, she generously offers that he stay hidden at the rooms over her father’s garage, which are never used. Anton agrees and their friendship deepens, to the extent where Anton risks being discovered just to save Patty from a vicious beating from her father.

Eventually Anton leaves according to the intended plan and soon after his departure, the FBI come to seek him out, as a result of which Patty is questioned and is forced into revealing the truth. She is sent to a reformatory school because she sheltered a POW, while Anton goes to New York, where he is shot while trying to evade the authorities. His death makes Patty sad but she vows to go and visit Anton’s mother one day and thus ends the beautiful Summer of My German Soldier.