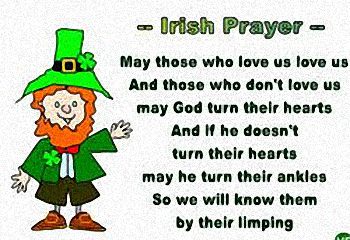 Are you looking for funny Irish sayings?

Do you want to know about most popular Irish sayings?

Read our guide for more information on choosing the right saying for your particular needs.

Now, that says a lot for Irish pride! Funny Irish sayings also have a twist of dark humour about them, as reflected in: “The Irish are a very fair people, they never speak well of one another.”

Humorous Irish sayings often have a touch of wisdom in them as in the following saying: “You have to do your own growing, no matter how tall your grandfather was.” Further evidence of the wisdom of funny Irish sayings is glaringly displayed in: “If you lie down with dogs, you’ll rise with fleas.”

Perhaps the funniest Irish sayings are those that centre on the famed Irish past-time of drinking alcoholic stimulants. The consumption of both beer and whiskey has resulted in numerous Irish sayings that bring a smile or a laugh even now: “God invented whiskey to keep the Irish from ruling the world.”

To which the Irish have a smart retort: “In heaven there is no beer…That’s why we drink ours here.” That drink has been the cause of mistakes, is underscored in: “Drink is the curse of the land. It makes you fight with your neighbour. It makes you shoot at your landlord, and it makes you miss him.”

Even Oscar Wilde, the famous Irish writer, added to funny Irish sayings with his memorable quip: “I can resist everything except temptation.” To defend the drinking man, a funny Irish saying comes to mind: “An Irishman is never drunk as long as he can hold onto one blade of grass to keep him from falling off the Earth.” And the saying that seems to sum up the funny side of the Irish is: “The Irish ignore anything they can’t drink or punch.”