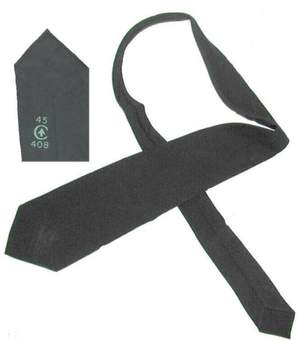 The Peruvian necktie isn’t a pretty knitted piece of clothing, it is a move used in Brazilian Jui Jitsu which is also finding some popularity in mixed martial arts competitions. The necktie is comprised of the legs of an opponent wrapped around the

The Peruvian is a submission move intended to put one’s oponent down for the count. It is similar to the guillotine hold. Before a fighter can untilize the necktie, he must be above and the oponent and facing him. Ideally the oponent is on the ground. First one arm is put around the opponents neck and the other arm goes under the opposite armpit.The arms are locked and pulled toward the fighter, then a leg is thrown over the opponents back. The second leg is wrapped around the opponent and the fighter pushes back with his torso to complete the move. The Peruvian applies considerable pressure to the neck of the opponent with the intention of subduing him.

The Peruvian necktie is not commonly used, but it difficult to break out of this type of hold. Experts advise those in the hold to first relax and turn into the opponent. It is more difficult to complete the move if the person being put into the hold is facing his opponent. The other possible method is to jump up or somehow get into an upright position since the Peruvian Necktie can’t be completed unless the fighter is on the ground. Many experts in MMA feel that once the move is completed it is almost impossible to break and can result in unconsciousness very quickly. All the experts say the only way to get free is to relax first since tensing up gives the advantage to the opponent.

Other Definitions of Peruvian Necktie

While the Jui Jitsu move is the most common meaning for Peruvian necktie, there are less benign definitions. In the U.S. prison system, a Pervian necktie is a v shaped cut made with a knife or shank at the area of the neck where a necktie would be worn. It can also refer to a form of punishment used by drug dealers on associates who are in arrears on their bills. In this case a gasoline soaked tire is placed around the victims neck and lit. These violent actions are sometimes called by other names and no one knows why the name Peruvian necktie is associated with them.

No matter what definition is chosen, the Peruvian necktie is not a good Father’s Day gift. Although the submission hold is sometimes referred to as the Brazilian necktie, it is most often called the Peruvian necktie in spite of its Brazilian origins. It seems odd that these violent actions should be associated with one of the least violent countries in South America.

Peru
Are you planning a trip to the World Heritage Site of Machu Picchu? For