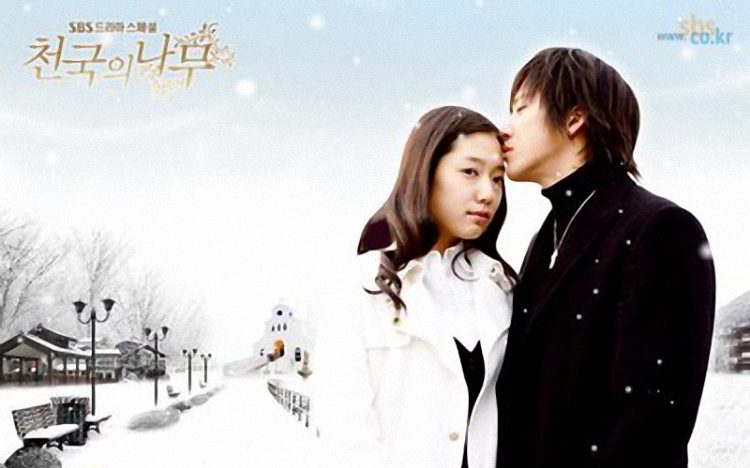 Tree of Heaven is a heart-wrenching Korean drama which was aired on SBS network and Fuji TV from February to March 2006. The 10 episode TV serial was released in Japan as well as China simultaneously to the delight of audiences everywhere.

The stellar cast includes the young actress Park Shin Hye who plays the role of a young girl named Hana. She loses her father at a very tender age and her mother moves to Japan. On her return the mother named Michiko played by Korean actress Mire Aika brings back a new Korean husband, Yoon Soo-ha played by Korean actor Jung Dong Hwan.

Accompanying him is his son from a previous marriage named Yunsuh. Lee Wan takes on the character of the young boy Yoon-suh in this Korean drama. He is shown as an autistic child who has lost his mother by his 10th birthday and that was possibly the reason for his withdrawal and disease.

Synopsis of the Korean Drama Tree of Heaven

The young girl Hana looks for companionship with her stepbrother and is quite fond of him. However due to his disease he remains very reclusive and does not want to communicate with her or build a relationship. When their parents decide to travel for their honeymoon, both the children are left with her paternal aunt who is the dead husband’s sister.

Hana’s parents used to own an inn and Hana’s mother decides to give charge of both the children as well as the inn to the sister of her deceased husband while they are away on their honeymoon.

However, the story takes a sad and dramatic turn while Hana’s paternal aunt Yoko played by Korean actress Kim Chung and her daughter Maya played by a twenty something Korean actress known as Asami Reina exhibit other sinister behaviors.

They abuse Hana and decide to sell off the property and business to pay off college loans and their gambling debts. As both the children suffer at the hands of their temporary family, Hana takes care of the young autistic boy who finally opens up to her.
He discusses most of his issues after the birthday and eventually both of them develop feelings for each other. However as the story unfolds Hana actually leaves with her friend ‘Sunbeh ‘ryu who is very fond of her. As the story develops Hana’s cousin Maya is shown to be continuously engulfed in jealousy against her cousin and as continually plotting to make her life miserable.

Production Credits and Execution of the Story

The story focuses on how young children actually develop a lot of courage and strength after a great loss. It shows how kindness and wrath mingle with greed and compassion to develop different relationships. The chief producer on the project is Korean filmmaker Huh Woong while the program was produced by Ko Kyung Hee.

The beautifully written screenplay combines the talents of two Korean screenwriters known as Moon Hee Jung and Kim Nam Hee. Korean director Lee Jang Soo and assistant Korean director Jo Soo Won utilize a linier progression to develop the format of this Korean drama and the end result is a slick production with a very high-impact storyline delivered in a comprehensible and fluid manner.