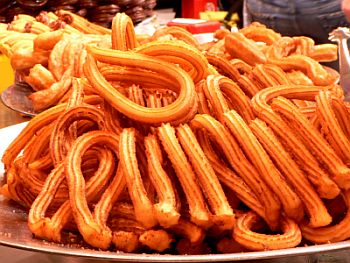 looking for spanish dessert recipes? Want to know what a real traditional Spanish dessert consists of? Our guide to popular desserts in Spain gives you the facts & info you want to know.

Spain is a country of diverse cultural heritage. This is evident in the changes seen in the styles of food, dress and music as one goes from one region to another in Spain. In Spain there are traditional foods and recipes which are common to the whole country, yet some regions still have food and recipes which are unique to that particular region. Traditional Spanish desserts also vary as one moves or travels across Spain.

Most of Spain’s popular desserts include rich, creamy smooth custards such as crema, tocino de cielo, catalana, and flan. These are made from milk and eggs. Tocino de cielo was once popularly made by nuns along with confections made from egg yoke, various forms of yemas and other sweets which they sold to support their convents. Traditional Spanish desserts also would include tarts which are also made from eggs and milk such as the almond flavored tecula mecula which can be dated back to the 16th century. Balearic cooks are known to make mint laced flao, ice creams and various cheese desserts such as quesadas and greixonera de brossat which are all traditional Spanish desserts used to end a Spanish meal.

Apart from the wide use of eggs and milk to make Spanish desserts, Spaniards highly favor fruits and fruit based desserts. Cakes and sweets are also very common. The rich cultural heritage of Spain has made a wide range of traditional foods and desserts all across Spain. Examples of some popular Spanish desserts are listed below.

Churros is a form of Spanish dessert that originated in Madrid, Spain. However it has become popular all over Spain. No open festival would be complete without a Churro stall or hawker nearby. Almond ice cream is a popular dessert choice and can be served with or without ensainmadas. Gato d’ametla is a Majorcan cake believed to have originated in Valldemossa and is a splendid Spanish dessert just as Magdalenas which are small light, fluffy cakes eaten during breakfast and said to have originated in Aragon.  Almond Cakes are a product of the Arab influence that was once present in Spain and is a combination of almonds, eggs and honey.

Traditional Spanish desserts come in diverse forms to suit any taste or palate. Their recipes can easily be found on the internet and with a little tutoring you can be on you way to preparing and savoring delicious Spanish desserts of your choice.