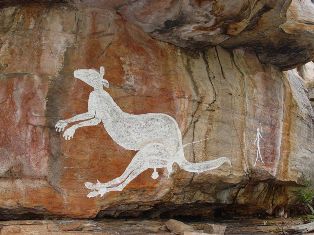 Would you like to know more about aboriginal rock art? Then read our factual and informative guide …

Aboriginal rock art has formed a part of the traditional painting and engraving skills and dates back to thousands of years. Samples almost 40,000 years old have been found in the Pilbara, Western Australia and the Olary region, South Australia. Some of the aboriginal rock art pieces are so old that researchers have been baffled by their origin, but have not been able to establish a link between the painting and the artist who must have made them.

While in some aboriginal communities these patterns or motifs are only seen on rocks, in other communities such as those in Central Australia, Arnhem Land and Northern Territory, these painting can also be seen on bark or canvas. There is a wide variety of subject matter and style incorporated in these aboriginal rock art painting. Even though the Australian aboriginal communities shared the same religious beliefs and way of life they lived in separate communities and each had their own language, ceremonies, history, legends etc.
It is often difficult to determine the age of aboriginal rock art because it is among the oldest known artistic images created by mankind. Some of these rock art images and paleo art were made well before the modern civilization of Australia arose. However, the oldest known rock art sites are in India in places such as Daraki-Chattan; there are also similar rock art images in South Africa.

The only way to date aboriginal rock art  is through the dating of the materials used in the creation of the image; for instance dating a sample of the paint or pigment used in the creation of the art form. Or you could also ascertain the age through indirect analysis where the age of a material that lies on the image; for instance, you could be used to estimate the date of the artwork by dating the natural chemical coating on the images if any. However, in the case of Australian aboriginal rock art, the pigment used in the images or the painted fragments buried at campsites are dated. Generally, techniques such as radio carbon dating are the most common when dating the material associated with a piece of art. However, some experts may also use newer techniques such as accelerator mass spectrometry (AMS).