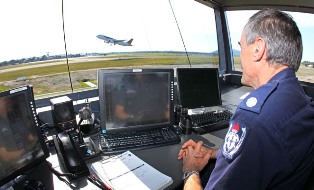 Airservices Australia has different Air Traffic Control Centers. Basically the area controlled by the Brisbane center is made up of the east and above the Black Flight Information Region. Conversely the area towards the west of the FIR boundary and the airspace below it is controlled by the Melbourne Operations Center. These are the two major Airservices Australia control centers for air traffic.

The main tower is located on Hamilton Island and has a total height of 5 m. The tower was constructed in 1984 and has a restricted view to the east because of the rugged terrain of the island. It was actually considered when the establishment of the Hamilton island resort airport had commenced. Initially there were plans to decommission the tower in 1992, but the Ansett Corporation took on the tower’s financial obligations.

As partial owner of the Hamilton island resort airport it was the only airline which operated at the Hamilton Island up to October 1998. Following that year half of the share of the Ansett Airline was sold to the resort and this led to the introduction of Qantas airline into the island. The tower is under the ownership of the Hamilton Island Airport while the staffing services are provided by Airservices Australia.

Aeronautical information including the provision of radio navigation aids and managing communication along with air space management are some of the functions taken on by the Airservices Australia. Additionally, it is involved in firefighting and airport rescue services across major locations in Australia. It is no longer involved in aviation rescue and search missions while the civil aviation division is responsible for airplane pilot licensing.

Airservices Australia providess detailed information on the different airspace classes utilized in Australian aviation and types of air traffic controllers along with managing all phases of flight. They can actually provide detailed information on Australian airspace and its management. Basically the aim of Airservices Australia is to manage an orderly safe flow of airplanes and helicopters in the different regions of Australian air space. Internationally recognized technology is used to ensure that collisions are minimized in-flight and the skies are safe.
[vqzb quiz_id=2]