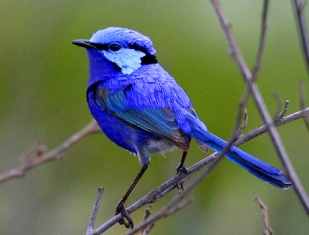 Would you like to learn about Australian birds including the popular Australian blue wren? Then read our informative and factual guide…

Also known as the “Splendid Wren”, the Australian blue wren is a passerine bird from the Maliridae family. The bird is found is several places across Australia from the western parts of the country to southwestern Queensland and also the central and western parts of New South Wales. The bird is generally seen in arid and semi-arid regions.

The color of the plumage of a breeding male blue wren is bright blue and black, while the females, non breeding males and juveniles are a grey brown. The Australian blue wren is a small bird with a long tail, like the other fairy wrens; the blue wrens also exhibit peculiar behavioral traits. One of the most surprising behavioral characteristics of these birds is their monogamous society with rampant sexual promiscuity.

For instance a male and a female blue wren are paired together for life something akin to a marriage yet both partners mate with the other birds in the flock, have children from such partnerships and even help to raise them. Because only breeding males are blue black, earlier zoologist assumed that the species was polygamous. The mating ritual involves courtship which entails the male plucking purple or pink flower petals and displaying them to the females.

The Australian blue wren are commonly seen in forests and dry scrubs because they are insectivores and primarily consume insects, supplementing their diet with some seeds, fruits and flowers the birds are generally seen in places where there is ample vegetation for shelter and that provides a good source of food. Even though the Australian blue wren has adapted fairly well to human habitation and has learned to coexist with us there are some urban areas where their population has gone down conspicuously.

It is not unusual to see blue wren short hopping from place to place in search of food; the bird is a restless and an active feeder. Because the round wings can offer initial lift but are not strong enough for sustained flight, the tail is used as a rudder and is often seen upright rather than straight; the blue wren can only manage jaunty hops or bounces at best. However the blue wrens are better fliers than the other fairy wrens.

Spring and summer are good times to spot these tiny birds when they go about foraging for food and they may even delight you with a song. This is a good time for these birds because insects are plentiful and the birds can take a quick break in between their forays

The Australian blue wrens are usually seen in small flocks resting together in the heat of the day. They are territorial creatures and groups of two to eight splendid fairy wrens will guard their territory throughout the year. Generally, the territories average 11 acres in woodland areas but depending on the number of males in the group and the density of the vegetation around, the size of the territory may increase or decrease