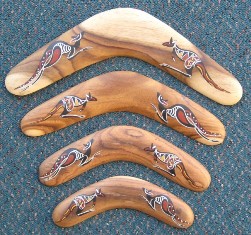 Interested in aborigine weaponry including the boomerang used by most aborigine tribes of Australia? Want to visit a museum in Australia that houses boomerangs and want to know more about their history and use? Then read our informative guide….

A boomerang is a medieval weapon commonly associated with the aborigine tribes of Australia; it is nothing more than a piece of angular wood that can be used for sports, or as a weapon in hunting. The boomerang is available in a variety of shapes and sizes depending on the origin of the tribe and the geographic location of the people who used it.

The most recognizable type of boomerang is one which returns back to the thrower traveling in an elliptical path to return to the point of origin if thrown properly. These boomerangs were commonly used to hunt. They were used as a decoy to frighten game birds hiding in the grassland into flight and into a waiting net. Today these boomerangs are used for leisure and entertainment and are made from various materials.

The non-returning is another type of boomerang which was used in several ancient civilizations including those found in Egypt and the native tribes found as far as California, Arizona, Southern India and many native Americans. These were used to kill rabbits and birds while some of these boomerangs were used in hand to hand combat.

Today, boomerangs serve a variety of purposes from percussive musical instruments to hunting events and from fire starters to play toys. These recreational weapons can come in sizes as small as 10 cm to over two meters. Tribal boomerangs will usually have inscriptions and designs on them that are meaningful to the tribe and the maker. Most boomerangs seen today are the returning type and are used in competitive sports.

The boomerang was first seen by the western settlers in Farm Cove where it was used as a weapon in a tribal fight then it was listed as “Wo-mur- rung” it was not until 1822 that it got its name boomerang from the language of the Turuwal people who used it as a hunting stick.

Some of the oldest boomerangs found across the country are well over ten thousand years old. However, older hunting sticks have been found in Europe; for instance one of the boomerangs found in excavations across Europe was made out of a tusk and believed to be more than 3,000 years old. Archeologists have also pointed to the fact that the Egyptian Pharaoh, Tutankhamen had a collection of boomerangs both the returning and the non returning variety; Tutan khamen died some 3,000 years ago.

Given the various discoveries of the boomerang; there is no accurate account of when the retuning boomerang was invented however, some people believe that it was a graduation of the flat and straight throwing stick.