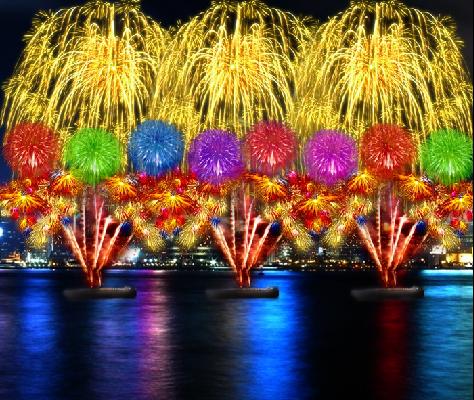 The Chinese people love to make some noise during New Year celebrations. Find out about the fireworks traditions of the Chinese New Year.

The Chinese New year celebrations are intensive and elaborate. The people of the country put a lot of effort and planning in to the various activities that are held for the first two weeks of the New Year. From giving themselves a complete makeover to renovating and decorating the houses and arranging all sorts of entertainment programs this time of the year is action packed and loud.

You will be able to witness a widespread availability of fireworks. Almost every store will be selling different kinds of firecrackers to anyone who wishes to make some noise. The most popular fireworks are the cannon sized firecrackers commonly available in every store.

One can hear a constant eruption of fireworks for the entire duration of the first two weeks up until the last dragon dance. There is no stopping the fireworks whether it be day or night. It seems the sick and the old just have to bear with it and accept for the sake of keeping alive their ancient traditions.

Actually if that was the case it would not have been enough to keep those troubled by the sounds patiently waiting for two weeks with all that noise. As is with every cultural practice in China there are a number of myths associated with the use of fireworks during New Year’s time.

Legend has it that the fireworks are set off to awaken a sleeping dragon who is supposed to bring forth the rain for the agriculture based society. Then there is another belief that the noise of the firecrackers wards of evil spirits. Ironically there are other cultures in Asia that believe the very opposite; that is that such noise drives away the good spirits and attract the evil ones.

Nonetheless the use of fireworks becomes even more intensive at New Year’s Eve. There are several firework shows put up by the government and other independent organizations that light up the sky till late in the night. As it is the Chinese spend New Year’s Eve awake as part of their ancient tradition. Hence you will get to hear the firecrackers going off all night long.

For someone not used to such an environment it may seem as if he is stuck in the middle of a war zone. Many foreigners who are in the country for business or other purposes find this to be a rather disturbing display of emotions. But for the Chinese anything goes in the name of traditions and has to be accepted at least if not actively encouraged.