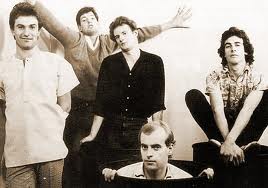 Reminiscing about the Australian Crawl? Learn more about the Crawl Australian music band originating from the Mornington Peninsula in Victoria…

The band Crawl Australia belongs to the genre of pop and rock music and was active from 1978 all the way through 1986. Working under the EMI and Virgin music labels the band went on to release music with great fanfare and received acclaim from both critics and their fans. Their associated acts include The Party Boys, The Angels, Chantoozies and the GANGgajang.

Former Members of the Australian Crawl

The Former members of the Crawl Australian band include David Reyne, Simon Binks, James Reyne, Brad Robinson and the deceased Paul Williams. This large band of musicians had other members to complete the string and included Bill McDonough, Guy McDonough, Graham “Buzz” Bidstrup, John Watson, Mark Greig and Harry Brus to list them all. Also known as the Crawl or the Aussie Crawl, theband was founded by lead vocalist James Reyne.

The band included a lead vocalist, a pianist, a rhythm guitar player, bass guitarist, lead guitarist and vocalist among others who played different percussion instruments. The origin of the name of the band Australian Crawl was based on the swimming style known as the front crawl or the Aussie crawl. The band played rock music, which paid homage to the surf culture of the 1980s and most of their music was centered on a hedonistic style of surf music.

They actually sponsored surfing competitions since a 1984 sponsorship and went on to work with broader issues like car accidents, the shallow face of materialism and  caution when it comes to being involved in romance. Their first album debuted with the title The Boys Light Up in 1980. It reached the Number 1 spot and was soon followed by the Sirocco in 1981 and the famed Sons of Beaches in 1982. None of the singles broke into top ten slots, which was surprising to the band. One of the famed singlea was the #1 hit Reckless and showcased A matured version of the band. It was part of the Semantics album released in 1983. From then onwards the band witnessed many upheavals.

Disbanding of the Australian Crawl

The first blow came with the departure of William McDonough in 1983 and then the sudden demise of his brother Guy McDonough in 1984. After these two episodes the other members subsequently left the band at different intervals. Following the cracks appearing in the band the pensive album released in 1985 was titled ‘Between a Rock and a Hard Place’ but failed to meet the standards of good music and disappointed both critics and fans. By the beginning of 1986 the band had disbanded.

However, their status as an icon to the Australian music industry was firmly in place. To commemorate their contribution to the music industry in Australia the Australian Crawl was provided a lifetime recognition through their induction into the Australian Recording Industry Association Hall of Fame in 1986. Sadly enough the founder and guitarist of the band Brad Robinson was not part of their induction ceremony into the Hall of Fame and died two weeks after this commemoration as he was hospitalized for cancer treatment.