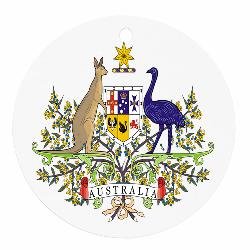 Want to know more about the National Emblem of Australia? Are you interested in finding about the historical significance of the Australian national emblem? Read our informative and factual guide……

The Coat of Arms can also be seen at the main entrance of the Parliament House in Canberra. The design of the emblem comprises of a shield which is a focal point of the coat of arms; this shield has within it the badge of each Australian state. The states represented in the top half of the shield are New South Wales, Victoria and Queensland, from left to right in that order. The states in the bottom half of the shield are representative of South Australia, Western Australia and Tasmania respectively from left to right.

The shield also has a seven pointed star on top which is the Commonwealth Star also known as the Star of Federation.  The six points of the star stand for the original six Australian states while the seventh point of the star is indicative of any future states or territories of the country. Together with a blue and gold wreath below the seven pointed star represent the federation of Australia.

There is also place for the local fauna in the emblem with a kangaroo and emu supporting the shield; these animals are the unofficial emblems of the country. The reason for this recognition is because they are native fauna, found only in the continent of Australia and were large enough to hold the shield. Some people also interpret the presence of these animals to a belief that they cannot move backwards in other words their presence is indicative of progress.

However, in reality both animals can move backwards but they seldom do so. There is also the presence of native Australian flora with the wreath of the Golden Wattle which is the official national floral emblem. The name of the nation is given on a scroll at the bottom of the emblem. The symbols used for the six states of Australia on the shield are as follows: The Cross of St George with a lion and stars for New South Wales, an imperial crown along with a Southern Cross for Victoria, a blue Maltese Cross and Crown for Queensland, the piping shrike from Australia for South Australia, the black swan for Western Australia and a red lion for Tasmania.