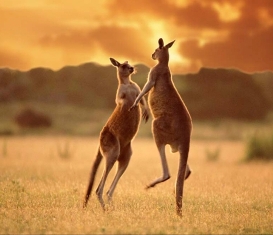 Would you like to know more about Australian marsupials, their physical traits and the habitat that they live in? Read our informative and factual guide…

Australian marsupials are also known as wombats; the animals are short with muscular quadrupeds and small legs; they have a small tail are not longer than 1 meter. They are generally seen in their natural habitat in Australian areas such as Tasmania and the South Eastern parts of the country. The name wombat can be attributed to the term used for the animals by the people or the Eora community; the aborigine tribe that inhabited Sydney before European settlement.

The animals have powerful claws which are used to dig extensive burrows and rodent like front teeth. A peculiar physical trait of the wombat is the backwards pouch. The advantage of this physical trait is that the animals spend a lot of their time digging and with the pouch backwards they do not get mud on their young ones.

Wombats are generally nocturnal animals but this does not keep them from getting out during the day to feed; particularly on overcast days. They are shy animals and keep to themselves which means that it would not be easy to spot one; however, they leave ample evidence of the fact that they were in a place in the form of cubic feces and damage to the fence.

The animal is an herbivore and feeds on sedges, grasses, herbs, roots and the bark of trees. The rodent-like tough front teeth are used to gnaw at hard vegetation. The color of the coat can vary in these mammals from sandy to brown or from grey to black. They weigh around 35 kgs and female wombats give birth to a single offspring after a gestation period of 2 to 22 days like all other small mammals. The young are housed in the pouch by the female for 6 to 7 months. Wombats are sexually active the age of 18 months.

The metabolism of these animals is distinctively slow and it can take almost 14 days to digest a meal; which is what helps them to survive in the arid habitat that they live in. They move slowly but can take shortcuts when threatened; however, when scared they can reach speeds of 40 km/h for up to 90 seconds. The carnivores that prey on Australian wombats include Dingos and the Tasmanian Devil. Their primary defense against such predators is the tough rear hide and a short almost non existent tail which cannot be bitten to pull the wombat out when it hides in the burrow.