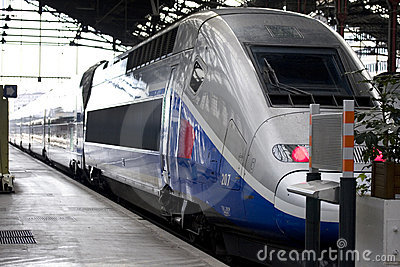 Do you want to travel on the high speed TGV train in France? Perhaps you’re looking TGV routes and prices? We’ve included all the most useful facts & information on TGV trains in France here.

France’s TGV, which stands for train a grande viteese or high speed train in English, is world renowned for its speed and comfort.  The TGV runs on five major lines in France.

The TVG south east line links Pairs to the south east of France including the major regional cities of Lyon, Dijon, Avignon, Marseille, Nice and Perpignon. This TGV train service also goes through the French Alps and stops at Geneva in Switzerland.

The TGV Atlantic line links the capital city of France to the west coast. Major stops on this TGV train line include Nantes, the Loire Valley, La Rochelle, Bordeaux, Toulouse and the French Basque country.

The high speed TGV northern train line connects Paris to Lille and Calais, two of the principal towns in the north of France.

Eurostar, probably the most well known train line, runs between Paris and London via the Channel Tunnel, stopping at Lille, Calias and Ashford in Kent along the way.

The past several years have seen developments in high speed train travel in France. It is no longer necessary to go via Paris in order to travel between many of France’s major provincial cities. The high speed TGV train in France now runs directly between Lyons and Nantes, Bordeaux and Lilles and several other destinations.

Buying a train ticket in France can be a complicated procedure with so many different types of special deals on offer. If you’re interested in buying a Eurailpass which allows you unlimited travel over a 2 week period, it’s better to buy this in your country as it will be 30% cheaper than buying it in France. The Eurailpass is designed specifically for non Europeans so EU nationals cannot buy it.