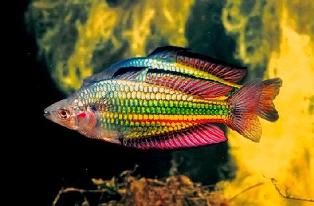 The Australian Rainbow Fish is usually found in a group and is brightly colored. Originating from the southern hemisphere it is only recently that aquarists have shown any interest in this fresh.

They are very beautiful and sturdy when it comes to their appearance. Some of the Rainbow Fish achieve a maximum length just below 3 cm at full adulthood, while other species of the Australian Rainbow Fish can grow as large as 20 cm in length.

Interestingly enough these fish never eat plants so they are never uprooted or destroyed leaving the aquarium very neat and clean and full of both plant life and marine life.

For those aquarists who appreciate fish spawning in their aquariums the Australia rainbowfish is an ideal candidate.

Classification and Origin of the Australian Rainbow Fish

The Australian Rainbowfish are found in large pools in New Guinea, Australia as well as some of the islands in Southeast Asia. They are part of the Melanotaeniidae subfamily and are considered close relatives to the Blue Eyes which are part of the Pseudomugilinae subfamily. Both of these belong to the Melanotaeniidae group based on the 2006 revision of the taxonomy and classification by Joseph Nelson.

The Australian Rainbow Fish is a very peaceful creature and mingles well with other non-aggressive fish species. However, if the aquarium is very small it can be difficult for it to compete and survive with other bigger fish and marine creatures. Therefore it is a good idea to keep it with smaller and peaceful species or give them an independent aquarium of their own.

Characteristics of The Australian Rainbow Fish

Australian Rainbow Fish live best in schools and thrive in a minimum group of six, whereas the ideal group should number between 10 to 15 fish. Not only is this beneficial for the health and sustainability of the schooling fish, the shimmer of this group is breathtaking. If you have a large group you can enjoy their impact in terms of the vibrant colours rather than have shy fish that hide from attention and need to feel secure. For a vibrant blend of color it is a good idea to keep many male fish together as they try to stand out and move about a lot in order to attract the attention of the female fish.

It is interesting to note that the Rainbow Fish of Australia is bred very scarcely. It is not very popular with aquarists because in its early stages is not very pretty to look at. In fact, it is quite dull and people don’t realize that it will take time for it to develop its colours.

Most stores sell the small Rainbow Fish but if you take care of them they develop beautiful colours as they grow. If they are located in a crowded aquarium in the store they will look very pallid and not mature to their full coloration which is beautiful in adulthood. The highly stressed Rainbow Fish will have damp colors and not grow into a beautiful looking species of fish.