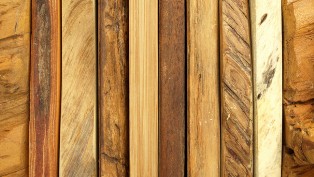 Do you intend to use softwood from Australia for making the furniture in your home? Would you like to know about the textures and colors of the Australian softwood? Read our factual and informative guide…

Australian trees were named by the first European settlers based on the similarities that they had with some of the trees back home in Europe. While some were similar in appearance, others had similar looking fruits or flowers or leaves; for instance, there are many trees in Australia which were then thought to be similar to Oak and hence they had the word ‘oak’ in them, many of these names are now used as the common name for these plants.

Even though most of the trees in Australia are hardwoods; there are some native softwoods that are used in furniture making; here is a look at two of the most popular softwoods from Australia.

The botanical name of the tree is Acacia melanoxylon R. BR; it stands 35 meters tall with a diameter of 1.5 meters; the wood is golden or dark brown and the grain of the timber is usually straight but you may be able to find some interlocked grains that give it added texture. It is one of the largest Australian Wattles and is found in the eucalypt forests as an under storey. It grows in moist and cool temperate regions in and around North West Tasmania.

One of the primary sources of this Australian softwood is the Blackwood swamps of Tasmania where there is an abundant supply of these trees. The wallabies relish the young shoots of the Blackwood tree or they would have grown more profusely. To keep the wallabies away, the coups are fenced off; however, another problem faced by lumber jacks is that the heavy machinery used for harvesting can only be used in the dry months or summer.

Blackwood has been used in the making of high quality furniture for centuries; it is common to see this wood being used in some of the colonial pieces. The color, texture, grain, strength to weight ratio and the durability of this wood make it ideal for furniture making.

Another popular softwood from Australia is the Red Cedar; the botanical name of the tree is Toona cilata and it grows to a height of 60 meters with a diameter of 3 m. The wood obtained from this tree is light to dark red in color and it is very soft with an open texture which makes it easy to work with. These trees are found in the east coast rain forests south of Sydney.

One of the reasons for the popularity of this wood since the colonial era is its softness, since the early settlers only had axes; they must have been inclined to use wood from a tree that was not only large but easy to cut down. However, the extreme exploitation of the plant species pushed it to the brinks of extinction and hence now, there is a ban on logging these trees in state forests. It is not possible to grow them as plantation trees because they need a dark environment to thrive.