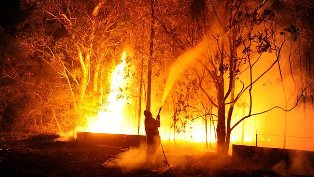 Want information on the wildfires that are so common across Australia? Are you studying the damages caused due to natural calamities in Australia such as wild fires? Read our factual and informative guide…

The last major wildfire in Australia was in Perth; however, the blaze was not entirely natural because sparks from a fallen power line were to blame for it. The fire swept across a large part of Western Australia; damaging as  many as 40 homes and compelling hundreds of people to evacuate their homes and seek refuge elsewhere. At least three people were hurt in the disaster.

The fire broke out on Tuesday afternoon after which two major blazes continued burning out of control for the better part of Tuesday night; the township of Toodyay had to be evacuated after the fire gutted the wheat and sheep farming district; even after consistent attempts; the fire threatened to spill into the neighboring town of Badgingarra that lies farther north.

The fires scorched almost 33,000 acres of farmlands and forests before they were controlled on Wednesday after the combined effort of hundreds of fire fighters and cooler weather conditions.

Wild fires are very common across Australia; particularly in summer and autumn when humidity is low and temperatures are scorching. However, rarely do these fires cause such significant damage gutting so many homes. Fire officials are of the opinion that summer months present the highest risk of fire in the country; with fire advisories being issued in several states. The riskiest months are from October to March. Add to this the fact that the country has been experiencing a dry spell for the better part of the last decade and it is not difficult to understand why most states are tinderboxes waiting to ignite.

In response to the fire in Perth, the state head Colin Barnett announced that the incident regardless of what caused it would be treated as a natural disaster and keeping with this declaration; he also announced that emergency funds would be allocated to the survivors; he went on to praise the valiant efforts of the fire fighting department who battled the calamity.

Barnett also stated that he was surprised by the extent of devastation caused by the fire and when he saw the charred ruins of the house he could not help but thank the fire fighters who risked their lives to move the residents to safety. It took the emergency services more than 2 days to get control over the situation; in the meanwhile 37 homes were gutted.

There were minor casualties reported from the fire fighting department as well where two men were treated for smoke inhalation while a third was taken to the hospital for heat related ailments. Farmers in the area reported a loss of live stock due to the fire. The extent of damage is under assessment and it will be a while before this wild fire is forgotten by the residents of the town.