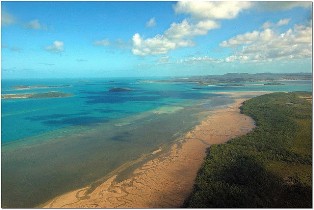 There are different islands that make up the Torres Strait Island group on the west central region. One of these islands is the Badu, which is grouped with the Mabuiag and Moa Islands to make the three a connected group. Of the three islands, the Moa Island, is the largest by far. With the two settlements connected by a basic 15 km gravel road, the island has a community of settlers which moved from the Prince of Wales Island as far back as the 1870s.
Airport at the Badu Island Australia

The second island, Mabuiag Island, was once home to a very hostile people who were not welcoming to outsiders. Mainly home to laborers who were pearling luggers most of the communities moved inland and stayed there for work purposes.

The famous Badu Island, which is the integral part of the three west-central Torres Strait Islands was initially known as a hostile island that was home to headhunters. The main occupation of the locals was to engage in the hunting of turtle and dugong along with providing mercenaries for warfare. The Badu men continued these practices until the late 1870s.

However, since the pearlers established their presence during the early 1870s and created a steady source of income for the local community by the 1880s there was a major shift and the locals moved towards becoming a lugger crew. The missionaries started arriving around that time to convert people to Christianity. By the late 1950s the island community had more than 13 boats and 200 men working during the peak of the shell industry season. Following the decline of the shell trade the locals moved back to the mainland in search of employment and better wages.

The unique community of the Badu Island Aibai Cultural Group is managed and led by creative and artistic directors Manuel Nomoa, Denna Nona, Barry Nona and Josephine Tipoti work as custodians of the music and dance of the local people. There are different clans of the Badulgal people who have a long-standing heritage and contribute to the culture in this island community. They preserve the Ailan Kastom or Island Custom of the Torres Strait Islanders.