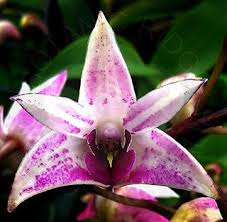 Looking for Dendrobium Australia native hybrids? Learn more about the native Australian hybrids Dendrobium and their propagation and cultivation…

There are basically four varieties of the endemic Dendrobium tetragonum. These are dendrobium tetragonum var. melaleucaphilumoccurs, which grows profusely in central Queensland all the way up to the north coast of New South Wales. Furthermore, it is a plant that is suited to coastal areas and appears mostly on the prickly paperbark trees. In this cultivar both the sepals and tepals have red or brown markings.

The second variety is commonly available in central Queensland all the way to the Illawarra district in New South Wales and is known as the dendrobium tetragonum var. tetragonum. Growing profusely on the riverbank of the Fitzroy River, it thrives at altitudes that lie approximately 1000 m above sea level. The cultivar grows near the swamps or on paperbark trees and is commonly known as the spider orchid. Its name is derived from the shape of its flowers, which look like spiders legs and have four-sided pseudobulbs. Its flowers are smaller than the first variety (mentioned above) and variegated with red, purple or brown margins.

The next kind of cultivar that grows in the tropical region on the east side is prevalent at a maximum altitude of 700 m above sea level and found in abundance between the Annan and Fitzroy Rivers. This cultivar known as dendrobium tetragonum var. cacatua is similar in nature to D. tetragonum var. tetragonum, but its flowers lack the red or brown color.

The fourth cultivar known as the dendrobium tetragonum var. giganteum is found profusely in the tropical region ranging from the northern side of the Fitzroy River and rising all the way up to Cape York Peninsula. The large flowers are bigger in size than the ones found on D. tetragonum var. tetragonum but are otherwise similar and these may have a pink or red labellum.

Some of the most amazing cultivars for the Dendrobium Australia native hybrids have been created in Australia. This cross is often known as Kennedy’s variety, which was crossed with another orchid known as the Barker’s variety to create a new variety with a red labellum. The program of Dendrobium being hybridised in Australia also promulgated line breeding for orchid plants.

There are a variety of hybrids produced from the D. tetragonum and these include some of those hybrids that have been created by crossbreeding D. speciosum with D. tetragonum to result in the creation of the hybrid D. Hilda Poxon.

These are utilized to cross the red lip with the normal labellum or that with the red lip and result in large star shaped flowers. While some may be pale yellow, others have stunning dark red-brown markings with each of the spikes ending with 20 beautiful flowers in the good cultivars.

D. Star of Gold is perhaps the most important part of the entire collection of Dendrobium Australia native hybrids and a part of all the orchid collections maintained by fans of orchids. The hybrid has been crossed with many others and the results are still in process for classifying the final client. Preliminary results show surprising elements like the big, dark-colored mauve hybrid, which could be a perfect show orchid.