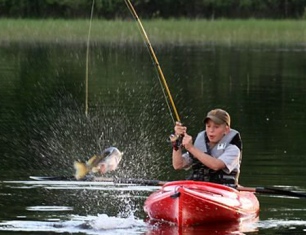 Interested in Australian Kayak Fishing? Learn more about the survival tactic that is now a sporting event through kayak fishing Australia…

During former decades kayak fishing was always considered a survival skill necessary for hunters in the Northern Arctic region. This individual activity was related to the Eskimos or the native Inuit’s and is recorded to originate and be practiced in the Arctic region.

Revolution of Kayak Fishing in Australia

Initially the recreational sport of kayak fishing in Australia utilized fiberglass, composite materials or even Kevlar to construct the kayak, which is actually a narrow boat for one person. When the roto-moulding revolution occurred the whole face of the sport changed.

The initial kayak was actually popularized by enthusiasts and different dedicated athletes. The entire industry actually revolves around the select few who choose to indulge in the sport through the use of a purposely built, lightweight kayak.

In today’s age the use of linear polyethylene has made kayak fishing in Australia a very modern sport, which has a large consumer base and is no longer focused on a small niche for sustaining the industry.

The Basic Features of a Good Kayak

For utilization in calm water a basic kayak should have adequate stability in the primary and secondary use along with a large amount of storage space, which should be complemented with a well-designed upper deck. This upper deck area should be adequately designed to mount different items which include lip grippers, rod holders, specialized tackle and landing nets.

An important aspect when it comes to kayak fishing in Australia is to get a kayak that is easy to handle especially when you are working on creeks and water bodies in the hinterland or freshwater rivers. The adequate weight and size of the kayak has an impact on its handling on the water.

There are different kayaks that have been created especially for offshore and open water use. The conditions in these areas are much more challenging and this has led to the creation of a kayak that one can set oneself on top of. This is known as the ‘Sit-on-Top’ kayak which has contributed to the increase in the popularity of this recreational activity due to the creation of a what is also called a scuppered kayak.

Under normal conditions, and challenging ones, it is considered a kayak that is almost unsinkable. All of the deck accessories are mounted by professionals and the kayak hatches are closed. This means that a seasoned sportsman will have very quick access to all the inshore reefs as well as the bays.

Seasoned kayak sporting enthusiasts swear by the ‘Angler’ series which features three models. Ocean kayak fishing is surely a true adventure and not only will you be delighted when you hook a mackerel or tuna on to your rod but you will also be delighted when piloting the vessel on the challenging water surfaces.