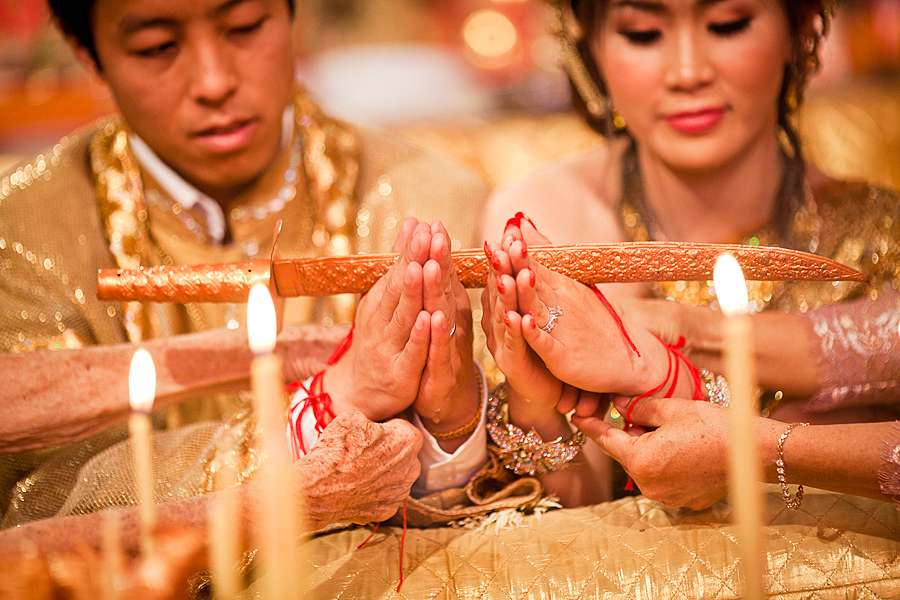 Discover the colorful and jubilant rituals and traditions of the Cambodian wedding festivals in relation to their norms and legends.

The Cambodian tradition of marriages is unique in its own right. The majority of couples have arranged marriages according to tradition. In some cases the match is actually made between two people since childhood. When they reach the right age they are married off as per the agreement that was made during their childhood. This practice has however declined with the passage of time.

When it comes to the wedding celebrations, they are rather elaborate and very colorful. The Cambodians actually have a wedding season and it is considered preferable to get married during that season. The marriage season coincides with the monsoon season. The traditional Cambodian wedding lasted three whole days. In today’s fast pace life however most Cambodians are satisfied with a one and a half day wedding party.

The wedding ceremony begins with the Choun Pelea ceremony. This is a ceremony wherein which the time and date for the marriage is officially determined and declared. The guests are received with lots of fresh fruits such as grapes, sweets, bananas and other gift items. The evening is full of elaborate ceremonies and songs and celebrations.

The real wedding ceremony actually takes place the next day. The Cambodian wedding takes place in the morning hours unlike the late night parties in other cultures. The wife’s home is the venue where the ceremony takes place. The achar directs the whole ceremony and a Buddhist monk is also brought in to deliver a short sermon to the gathering. Those present recite their prayers and bless the couple. The gathering is usually confined to a few close relatives and friends along with the Buddhist monks.

The evening banquet is where the real wedding party is. This event also takes place at the bride’s home. The bride and the groom are dressed up in traditional attire. The traditional Cambodian wedding dress is known as kahen. The bride wears a Sbaay which is a Cambodian version of a sash whereas the groom is made to wear a loose silk shirt and pants.

The Cambodian marriage is one full of ancient rituals. One of the ancient wedding rituals is that of hair cutting. The hair is then tied up in cotton threads and then soaked in what is presumed to be holy water and then tied around the wrists of the couple.

Another ritual is where the groom carries the bride’s scarf. This goes to show that he is a man who has just entered into a marriage contract with the girl from a new family. These ancient rituals have their roots in the cultural practices of the people of Cambodia that date to many centuries ago. They have been preserved and passed down the generations with great care so as to maintain their identity. Although many rituals have been dropped overtime one can still capture the essence of the traditional Cambodian wedding and how it is celebrated even today.