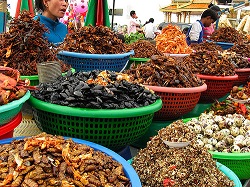 Tantalize your taste buds by finding out about the most famous Cambodian food items on the nation’s menu.

The country of Cambodia is known for its food. This unique land has a very traditional setup when it comes to everyday meals. The soup is always a must which is almost always accompanied by a classic Cambodia salad.

Then you have the main course meal which is quite likely to be a fish dish accompanied with some vegetables and rice. As you can see the Cambodians are into eating healthy food.

The Cambodian meal is however not complete without dessert. After all you need to end the meal on a sweet note. Fresh fruits are by far the most popular choice for the people along with other classic items like the sticky rice that the region is famous for.

The Tantalizing Treats of Cambodia

Although Cambodia has many beautiful things to show to the world in the form of the Angkor Wat ruins and other historical treasures, the cuisine of the country is also one of those things that need to be valued. Known to have been down to earth simple people the Cambodians have a very interesting national cuisine.

The Khmer diet as it is popularly known revolves around rice and freshwater fish. These two items form the basis of the Cambodian cuisine. It is the geographical location of the country that has given shape to a cuisine based on these items because the Cambodians have plenty of access to both these items.

The Mekong River and the Tonle Sap are the country’s main resources of freshwater fish. The monsoon season sees these water bodies flood up the land and irrigate the rice fields as well as providing fresh fish in huge quantities.

The Formation of the Khmer Cuisine

The cuisine of Cambodia which is popularly known as Khmer food is actually a fusion of a number of cultural influences. The French have had a prominent influence on the cuisine of the country during their years of colonization. The second biggest influence has come in the form of Chinese immigrants who brought along with them their eating habits. One can even find hints of Vietnamese cuisine as well as the cuisine of Thailand to be present in Cambodian food.

There is much regional variance in the kind of Khmer food that is eaten within the country as well. You will find a wide variety of seafood items on the menu in the coastal towns. The ingredients used to prepare the sea food dishes are similar to those used in other South Asian countries. Lots of rice and fish sauce is accompanied with coconut milk, chilies, garlic, lemon grass, shallots and other items of the like.

Amok is perhaps the most popular item on the Cambodian menu. It is a catfish curry dish that is steamed in banana leaf cups. The sour chicken soup with herbs is another popular food item in the region. The fermented soy bean dip with fresh vegetables is a Cambodian classic and so is the spiced beef sour soup. When it comes to dessert items the sticky rice is the hot favorite with the pumpkin custard being another hit item.