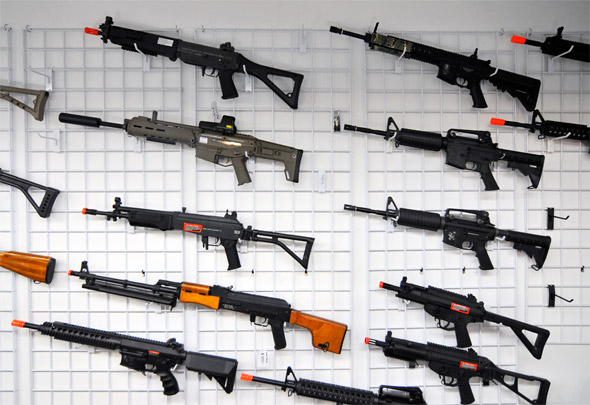 Want to buy Airsoft guns in Canada? Interested in an Airsoft gun in Canada? Read on for facts and info on these special type of guns…

Airsoft guns are recreational and training guns that use non-lethal soft plastic BB-style pellets. Whereas normal BB pellets are zinc- or copper- plated spherical and sometimes pointed steel balls that are 0.177 inches (4.5 millimeter) in diameter, airsoft pellets are 6 millimeter in diameter and always spherical of soft plastic or other non-metal construction.

In addition, BB guns have muzzle velocities, which is the speed at which the pellet leaves the barrel of the firearm, of 300 to 450 feet per seconds and sometimes even higher in high-powered rifles. At this velocity, BB pellets can pierce human skin and cause injury, especially at short range. In contrast, airsoft guns usually have muzzle velocities in the 100 to 300 feet per second range. Although some models can go as high as 850 feet per second and the soft nature of the pellets precludes chances of any injury except in the case of a direct hit to the eye.

Airsoft guns also differ from paint-ball guns in that airsoft pellets do not leave a mark upon impact whereas paint-ball projectiles are designed to disintegrate and release their paint payload on impact.

Airsoft Guns That Can be Sold in Canada

Recent Canadian legislation drastically limits what airsoft guns can be sold in the country. The legislation has outlawed the sale of any airsoft weapon to a civilian that is a replica of a real firearm. This limitation does not apply to sales to law-enforcement agencies and the military for use as training weapons or to theatrical and cinematic production companies for use as props. Also muzzle velocities of civilian-use airsoft firearms are limited to less than 500 feet per second and the weapons must have a clear or transparent outer shell to distinguish them from real weapons.

007AirSoft are located in Calgary, Alberta. In the most popular category of Automatic Electric Guns (AEGs), they stock products from all the famous brands such as Tokyo Marui, Classic Army, and ICS.

G&G armament of Taiwan also makes some Canada-legal AEG airsoft weapons for 007AirSoft. Their M4/M16 line lists a total of nineteen different models of the venerable US Army style assault rifles. Prices range from CAN $333 to $524 plus GST. The typical model has a 25000 rpm motor and comes with a 1400 milli-Ampere battery. The guns are capable of a muzzle velocity of 360 feet per second with a 0.2 gram pellet and come with a 450 round magazine.

None of the Spring Guns in 007Airsoft’s lineup of models from Tokyo Marui, Classic Army, Maruzen, and others are civilian-legal. However, KJW (Kuan Ju Works) make a variety of civilian-use Gas guns for 007Airsoft. You can take your pick of Glock, Beretta, & Ruger style handguns as well as a Ruger style carbine and a couple of police style rifles.

Canada
Looking for Canadian pet medications? Want to know about all the different reasons for