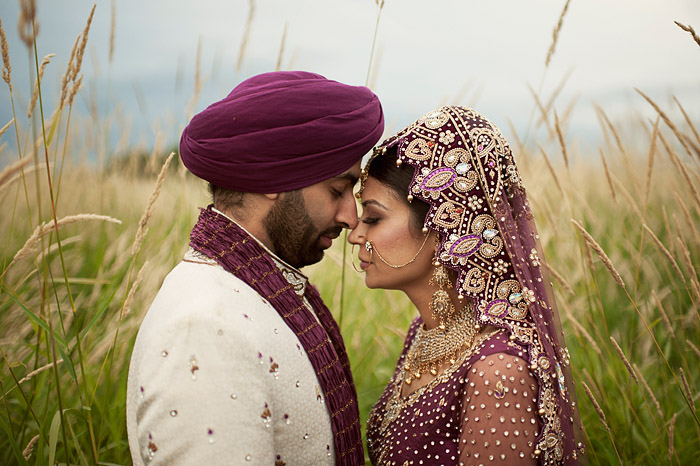 Want to learn more about Sikh weddings in Canada? Read on for a comprehensive overview of how Sikhs celebrate their wedding ceremony Canadian style…

Sikh weddings in Canada take place in the traditional form in the holy place called the Gurdwara and are traditionally completed in the three-day festival. There are many ceremonies one of which is the Anand Karaj and this is the statutory form of Sikh marriage in Canada or anywhere else in the world followed by Sikhs.

The words mean blissful union and a marriage in the sikh religion is considered an equal partnership between two individuals.

This festival is celebrated between the two families and there is full freedom for the girl and boy to choose their life partner independently and then acquire the blessings and consent of their family. The official Sikh code of conduct states that race, lineage, caste of the spouses should not be a consideration when selecting a partner; in fact the only code is that the faith that is practiced by both is the Sikh religion and they are joined in wedlock via the Anand Karaj ceremony. There is no dowry arrangement as this marriage is not considered a business agreement and it is discouraged to consult horoscopes or follow superstitions to determine the date and time of the wedding.

There are also no restrictions as to the initiating time of the ceremony and ending time but it is preferred to conduct it in the morning. The Kurmai or engagement ceremony is not a strict requirement but is often performed one week before the wedding in the home of the boy or the Gurdwara. The wedding also may be conducted in the temple or home but not a banquet hall. The common meal served at the wedding is called the langer and the groom’s family is provided with sweetmeats and the brides family is provided with traditional clothing and sweetmeats for the bride.

Sikh weddings in Canada start with the groom’s family and friends setting off for the girl’s house in the evening and this procession is called the Braat. They are received, hosted and entertained by the girl’s family and spend the night at the house. The following morning a ceremony takes place at the girl’s house or the local Sikh temple and religious ceremony festivities are culminated with song announcements that follow throughout the day.

The Milni is a traditional ceremony where each member of the bride and groom’s family meet each other and exchange garlands and this ceremony is followed by light snacks and tea.

If there are time constraints in the West then Sikh weddings in Canada are shortened to one or two days and the wedding occurs in the morning followed by a dance and dinner in a hall or hotel in the night. If there are strict constraints of time then only the religious ceremonies are conducted and there is no banquet or the banquet is delayed by a certain number of days. The Adras are special prayers conducted at the beginning of each ceremony and the groom and bride are part of the ceremony where the bride is supported by her family members in completing the rituals necessary to finish the wedding ceremony.

USA
A Palm Desert location makes an excellent wedding venue. If you want to plan

Turkey
Interested in Turkish wedding food? Want to know what cuisine is typically served at