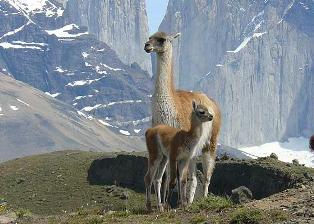 Although the natural typography of Chile is quite diverse, its animal life does not nearly match up. In fact when compared to other South American countries Chile has quite a restricted diversity in its animal life.

One of the primary causes for the lack of diverse animal life in Chile is the barrier formed by the mighty Andes mountain chain. This greatly restricts the migration of animals towards Chile. Furthermore the northern desert is another obstacle in the way of animals seeking to migrate southwards of the Andean fauna.

Chile has a number of terrestrial animals with the rodent being in the largest numbers of them all. There is a variety of species of Andean rodents found in the region. Foremost amongst them are the degu, Chinchilla and mountain Viscacha. These rodents are valued for their fine fur coats.

Another animal unique to the deciduous forests as well as the rain forests of the south is the monitor de monte. This is a marsupial which can be found in abundant numbers in the above mentioned regions. A water rodent known as the nutria is also to be found swimming the streams of Chile.

The llama also happens to be a Native animal of Chile. The llama is credited as being the only surviving variety of paleocamelides from amongst the ruminants of the guanaco. It shares a common lineage with the ancient predecessors of camels. Other similar varieties include the alpaca and the vicuna. The vicunas are primarily valued for fine high quality wool that can be produced using their thick and silky fleece. The native Indians living in the Altiplano have been making use of the wool derived from the vicunas.

The region from Northern Chile to the Chilean Patagonia is home to a large number of Guanacos. Chile also boasts to have one of the rarest known species of deer on the Andes. This is none other than the huemul which is also honored to be the deer on the national seal. The other variety of deer found in the mountainous region includes the pudu which happens to be the smallest known deer.

The number of carnivores in the region is far lesser than the herbivorous count. Amongst the carnivores the puma is in greatest numbers. There are however a number of other feline predators including the colocolo and the guina. A variety of canids are also to be found in the region. The highly revered Anean wolf is native to Chile along with the infamous long tailed fox.

A host of winter migratory birds make their way to Chile as well. The collection of birds includes some exotic species such as the flamingos and parrots that are to be found in northern and central parts of the country. Other animals found in scarce numbers throughout the country include the condor, the carancha and Darwin’s frog.