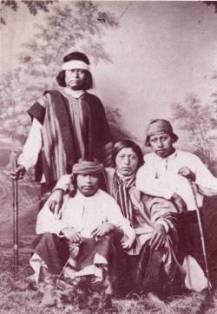 Want to learn more about ancient Chilean history? Read our guide for facts an info on the early history of Chile…

The history of Chile goes as far back as 1200 BC. It was at this time that the territory now defined as Chile was first inhabited. However by the 16th century the Spanish landed in Chile in an attempt to subdue the region and add it to their overseas colonies collection.

The real history of Chile begins with the migration of a tribe of Native Americans to the regions. These tribes came and settled in close to the coastline as well as in the fertile valleys of the region. Over a dozen Amerindian societies were established in Chile.

It is believed the first human beings to inhabit the region came along the Pacific coast in a southwards direction. Rapid expansion followed mainly of the Clovis culture. However Archaeologists have managed to dig up an entire site known as Monte Verde which dates more than a thousand years back before the advent of the Clovis. The Pali Aike Crater’s lava tube and the Cueva del Milidon were some of the earliest territories to be inhabited in Chile.

Historians have classified the indigenous people of Chile throughout history into three broad groups. The first of these groups was of the northern people. They were particularly renowned for their rich handicrafts and were heavily influenced by Pre-Incan cultures. Then there was the Araucanian culture. They were settled between the fertile lands of River Chaopa and the Chiloe Island. This was primarily an agricultural society. The third group of indigenous people of Chile was the Patagonian culture. This culture was composed of nomadic tribes which had fishing and hunting as their main activity.

It is important to note that during the ancient history of Chile there was never a centralized elaborate civilization that reigned over the region on its own.

With the passage of time the Araucanians became one of the largest tribes of America. Their society was made up of hunters and gatherers along with farmers. They were a very mobile tribe and were actively engaged in trading activities. They would also frequently engage in warfare with other indigenous tribes. Their society was characterized by small family clusters and village customs.

On the other hand central and southern Chile was inhabited by the Mapuche tribe. For a brief period during history the Inca Empire tried to exert its influence in the region but could not sustain itself for long. They had to face severe resistance that disabled them from establishing themselves in the region.

Prior to the arrival of the Spaniards in 1530 the total number of Araucanian people amounted up to one million. However European conquests and spread of viral diseases reduced this number to half. The locals gave the Spanish quite a tough time up until the nineteenth century when they finally gave way. Even today the Araucanians are regarded as the first national heroes of Chile for their display of valor.

Chile
Looking for a Chilean Sea Bass Recipe? Read on to get one of the