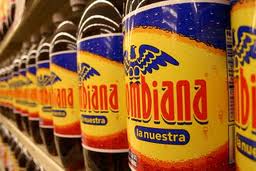 Colombian soda, or Colombiana, is flavored like the kola champagne, similar to cream soda, and is characterized by a brownish orange color. Read our guide for more facts and information…

Soda is a drink containing carbonated water, caffeine, phosphoric acid and a high level of fructose syrup. Diet sodas contain additives such as saccharin and aspartame. It is considered as an acidic drink, and is not associated with any health benefits. However, soda is available in several brands and is popular among the masses.  Colombia is no exception and its native soda is known worldwide. Other than soda, it is famous for its coffee, fruit juices and other drinks that are associated with distinct flavors and recipes. For instance, Guarapo is an old drink made from fermented fruits, and Aguapanela is made by dissolving sugarcane in water and mixing with lime juice.

Colombiana is a carbonated beverage, which is popular among Colombians. It is the soda drink of tamarindo. It is basically a champagne soda in brownish orange color, and is known for its unique taste which cannot be found elsewhere as it is obtained from plant extracts on Colombia’s Caribbean Coast. In Colombia, soft drinks are known as ‘gaseosa’, meaning gassed drink, though the term ‘refrescos’ is also used at times.

Ingredients and taste of Colombian soda

The carbonated champagne soda is described as something that resembles iced tea, though the tantalizing taste is characteristic and tempting enough to ask for more. The ingredients include carbonated water, fructose, citric acid, colors and natural as well as artificial flavors. Sodium Benzoate is used as the preservative. Neustra Colombiana Soda is the first Kola Champagne product of Colombia and has retained its popularity for many years. Unlike most kola drinks, the sugary taste dominates in Colombian varieties. Flavors may be described as vanilla, bean, almond and pistachio.

The indigenous drink of Nasa Indians in Colombia

Nasa Indians are a group of indigenous people in Southwestern Colombia, who are known for their soft drink manufactured from coca leaves, which has been a staple among native Colombians for centuries. It is an amber colored soda with cocaine as the main ingredient, and is claimed to be the Colombian-made alternative to Coco Cola. Colombia is the largest producer and exporter of cocaine in the world, and Nasa Indians are said to grow legal coca plantations for traditional purposes. Their soft drink, which is called Coca-Sek in Nasa language, is translated as ‘Coca of the Sun.’  It is manufactured in Empresa Colombiana de la Coca, a soda company owned and managed by a few Nasa Indians. It has gained the favor of local tasters, and is said to have a tea-like flavor.

Colombiana is usually not as full-bodied, rich or thick like other champagne sodas. It is consumed as a soft drink, or mixed with rum or beer to form a mix called Refajo. Salpicon is a drink made by mixing chopped fruit with soda or orange juice.

Colombia
Columbia rain jackets are among the best waterproof clothing made of breathable material, and